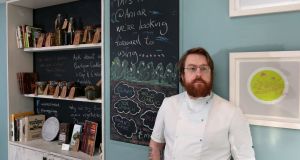 Social distancing rules will make it impossible to open most Irish restaurants after Covid-19, according to one of Ireland’s top Michelin-starred chefs.

JP McMahon says that with social distancing rules of even 1.5 metres, it would not be viable to open any of his three Galway restaurants, including Michelin-starred Aniar. Mr McMahon also owns the Cava Bodega tapas restaurant and Tartare Café and wine bar.

“We cannot open to lose money and get further into debt,” said Mr McMahon. “With two metres social distancing, we are also looking at 75 per cent job losses. I don’t know what to do.

“We employ 45 people. Whatever model we employ, we’re looking at least 20 redundancies. That’s best case scenario,” he said, adding that it would involve providing a takeaway service alongside some meals in the restaurants.

Mr McMahon, who writes a regular column in The Irish Times’ Saturday Magazine, published figures showing that Aniar, which usually sits 24 people, would have to reduce this to eight to respect the two-metre rule. At 1.5 metres, this would rise only to 10 but at one metre between diners, the number would increase to 16.

At Cava Bodega, his largest venue, which normally sits 60, the number would be slashed to 20 to accommodate two metres of space, 30 at 1.5 metres and 40 and one metre.

Mr McMahon, said that at Cava Bodega even one metre of social distancing would see it operating at a loss of €100,000.

“And Cava is our breadwinner. It would have been making a profit last year of around €100,000 and that is what keeps the other two restaurants going.

While the restaurant, was “quite lucky” in that it has a large dining room, it will still lose about a quarter of its table capacity, he said. In terms of absolute numbers, where they could previously seat 70 people, that will now fall to as low as 38 in one sitting due to social distancing requirements, Mr Robin said.

“Will it be profitable? No,” he said. How long that is sustainable is unclear, but Mr Robin said that, “for the time being we’ll do everything possible to reopen”.

“Is there anyone in Government who understands that two metres of social distancing will not work,” Mr McMahon said. “We will not open with the two-metre rule, we just can’t. I’d love for one of them to come out and explain how you can run a business at 50 per cent capacity.

“As a director, you have to ask yourself are you willingly going to open just to make a loss,” he asks. “ ‘Let’s hope for the best’ is not responsible directing of a business.”

Asked what might be needed to make his businesses viable under social distancing rules, he said they would need the Government to continue covering a portion of staff wages under the temporary wage subsidy, a reduction in VAT, the abolition of commercial rates for 12 months and grants.

Halving VAT on his businesses would nearly cover the loss at Cava Bodega and a one-year break from rates would save around €20,000, Mr McMahon said.

“That is just the beginning of what Government needs to do,” he said. Borrowing was not a practical option, the Galway restaurateur added.

“We can’t borrow money based on the current climate. There are no tourists at all. It’s purely about survival mode.”

He said Aniar is unlikely to reopen this year all as it depends on tourists, especially from the United States, for up to 80 per cent of its business.

Under the Government’s five-step plan to reopen the economy after the coronavirus crisis, sport can resume behind closed doors on June 29th, the same date as restaurants will be allowed to reopen. GAA and soccer are earmarked to return three weeks later on July 20th, with full contact sports, including boxing, to return in August.

However, the Government and its medical advisers currently insist that the two-metre rule will remain in place even at that time.

“The need for two metres is not a scientific fact,” Mr McMahon said. “In other countries it is 1.5 metres or even one metre. And Germany is talking about doing away with social distancing in August.”

“One metre is sensible. It may save our whole industry. But once contact sports resume, we need to do away with social distancing. For the sake of our country.”