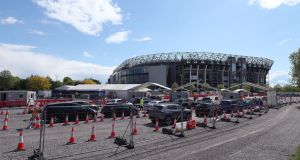 The English Rugby Football Union chief executive Bill Sweeney has warned it would be a “catastrophe” if next year’s Six Nations is hit by the coronavirus, admitting the organisation would need a government bailout if England do not play again until next summer.

Sweeney revealed the union is facing losses of at least £100 million (€115 million) if England’s autumn internationals are played behind closed doors – a figure which rises to £122 million (€140 million) if they are cancelled – and if next year’s Six Nations is similarly impacted, he conceded “we would have to come to the government for support”.

The bleak financial outlook for the RFU comes after World Rugby issued guidelines warning that no competitive rugby should take place until governments allow gatherings of 250 people. The guidance also suggests that elite rugby matches are likely to take place behind closed doors, or in front of radically reduced crowds, until a coronavirus vaccine is freely available, which could take up to 18 months.

Sweeney revealed that even if England’s autumn fixtures go ahead as planned the RFU stands to lose £47 million (€54 million). In all likelihood however, the union – which has already placed 60 per cent of its staff on furlough – is facing a far greater hit with Sweeney conceding rugby union may be one of the “last cabs off the rank” due to its high-impact nature.

“If this was to be prolonged and go through into the next summer and the Six Nations games were impacted, then there would be a catastrophic impact on rugby union in England,” said Sweeney, who warned it could take up to six years for the RFU to recover financially from the coronavirus crisis.

“Hence the importance of the autumn internationals taking place in November. If we get into a situation where we’re talking about Six Nations matches in February and March next year impacted there’s a limit to what we can do independently – we would have to come to government for support.”

Sweeney, however, continues to plan for the autumn fixtures to go ahead, along with England’s postponed Six Nations match against Italy. At present there is no broadcasting deal in place for the four autumn Tests with Sweeney admitting the bidding process for those rights and the new Six Nations deal was on hold.

He did not rule out a deal with a free-to-air broadcaster but conceded that would likely cost the union another £10 million (€11.5 million). “We find ourselves in a very difficult situation in terms of wanting to have the largest number of the population watching the games and we get something like nine million watching the Six Nations matches on free-to-air as we had last season,” he added. “But at the same time, as highlighted by the Covid situation, we need to maximise the possible revenue we can achieve.” – Guardian