Over-70s advised not to stop and talk when outside exercising 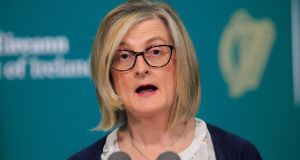 Liz Canavan Assistant Secretary to the Department of An Taoiseach said on Tuesday ’it is still recommended that people cocooning avoid the shops’.

People over the age of 70 who have been asked to cocoon have been advised not to stop and talk with friends or neighbours when they are exercising under the new 5km rule which came into force today.

At the Government’s Covid-19 briefing on Tuesday morning, assistant secretary general at the Department of Taoiseach Liz Canavan said “the key message is to avoid all contact with other people, maintain a no touch policy and wash your hands on returning home.”

“It is still recommended that people cocooning avoid the shops,” she said.

On the Government’s roadmap to exit restrictions which was published last Friday, Ms Canavan said it was a “flexible framework based on an assessment of risk.”

She said it was a gradual and stepped plan towards reopening the economy.

“Our ability to open the economy and society will be entirely dependent on our success in slowing down the virus.”

Ms Canavan said in deciding if more restrictions can be lifted the Government will be informed by regular reports from the Department of Health on the progression of the disease, the capacity of the health service and “an assessment of the risk of other deaths and illness as a consequence of the restrictions.”

Social and economic considerations will also form part of that discussion, she said.

The Government has also urged the public to abide by restrictions at funerals where attendance is currently limited to ten people.

“Some of the ceremonies, traditions and rituals that are fundamental to the grieving process are no longer available to us and we have to find new ways of doing things. It has been necessary to limit attendance at funerals to ten people with social distancing of at least two meters. For those who cannot attend we would encourage you to connect via the various communication channels that are available.

“This restriction on numbers is hard but we would urge people to please adhere to it to protect all those involved from Covid-19, mourners, funeral directors, the religious and others who officiate services,” Ms Canavan said.

In terms of business, around 52,120 employers are now registered with Revenue the temporary wage subsidy scheme. More than 427,000 employees have now received at least one payment under the scheme.

Ms Canavan said on Tuesday that approximately 598,000 people will receive their weekly Covid-19 pandemic payment after the “smallest week on week increase in the number of payments.” Some 73,000 people have now contacted the Department of Social Protection to close their claim.

Separately, the Government has confirmed that Cabinet made adjustments to the National Public Health Emergency Team’s (NPHET) roadmap for easing Covid-19 restrictions by removing references to over-70s ‘cocooning’ after August.

In the NPHET ‘roadmap’ document presented to Ministers last Friday morning, it recommended that some cocooning restrictions would continue to apply to over 70s during the fifth and final stage of the framework’s timeframe (due to start in August). The rationale used was they remained at higher risk of contracting the virus.

However, at its Cabinet meeting some hours later, the Cabinet decided to remove the reference, which did not appear in its own roadmap document, published on Friday evening.

Asked at last Friday’s briefing on the plan whether the Government had implemented NPHET’s recommendations “without any tweaking or variation”, Minister for Health Simon Harris said it had, though there were textual changes.

“The Government has published a road-map that is entirely consistent with the advice given by NPHET,” he said.

On Tuesday night, Dr Holohan acknowledged there were “textual differences” between NPHET’s recommendations and the plan published by Goverment, but said “the whole of the advice” provided by public health officials had been accepted, including specific measures relating to cocooning.

Also on Tuesday, Government figures described the change as a “tweak” and “textual”, and disagreed that it amounted to a substantive change.

“Cabinet colleagues raised concern as you would expect them to in terms of the impact of cocooning on over 70s,” said Tánaiste Simon Coveney on Tuesday.

“NPHET gave a very good public health explanation as to why it was necessary and the Government came to a decision on it,” he said on RTÉ Radio One.

While conceding that a change had been made, Mr Coveney denied there was any significant tensions between Government Ministers and NPHET on the matter.

According to sources, some Cabinet members were of the opinion that reference to over 70s still “cocooning” in August might lead to confusion, given that a decision had already been taken to ease the effective 24-hour lockdown restrictions from Tuesday.