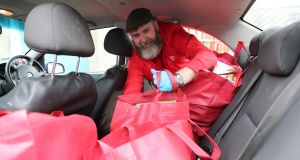 While it is difficult to find positive elements in the present Covid 19 crisis, the sense of communal solidarity witnessed by unprecedented acts of kindness by tens of thousands of Irish people is something that we should be eternally grateful and proud of as a nation. Behind the brave body of frontline workers in healthcare, retail, cleaning and associated emergency services, lies a network of voluntary and community groups working alongside government that have been crucial in the fight against Covid 19 and the protection of communities across Ireland.

This critical role played by civic engagement of the community and voluntary sector has brought renewed focus on the term ‘social capital’, the term coined by American political scientist Robert Putman at the turn of the twenty-first century. Putman’s seminal work Bowling Alone, highlighted the decline of social capital, across the United States which he saw as crucial components of every properly functioning society.

Putman believed that important elements of social capital included community networks, participation in local clubs and voluntary associations that enabled citizens to work together more effectively to pursue shared objectives in their daily lives. These crucial components gave people a sense of belonging and togetherness, and were essentially the social glue that held societies together through good times and bad.

Putnam’s analysis of American society throughout the 1990s identified widespread civic disengagement and the decline in participation in a raft of political and social activities. ‘Friends’ and ‘Neighbours’ were the names popular TV programmes, not important parts of the lives of many Americans.

Similar trends of civic disengagement were soon seen in Ireland in the heady days of the infamous ‘Celtic Tiger’ where declining community values were replaced by a growing focus on commercialism. This growing global trend towards individualism had an impact across Irish society with many community organisations and clubs witnessing a decline in volunteer numbers.

Cash rich and time poor were common themes across Celtic Tiger Ireland. In a short space of time, the country moved away from a community based culture that was concerned about the public good to a culture based on individualism that constantly extolled the virtues of the unregulated free market. These developments resulting in ever decreasing lack of civic engagement even prompted Taoiseach Bertie Ahern to establish a Taskforce on Active Citizenship chaired by Special Olympics Chairperson Mary Davis.

Ironically, many political and social commentators believed that in more recent times, Ireland was again repeating the sins of its Celtic Tiger past with more attention focussed on an economy rather than a properly functioning society. Across many parts of pre-Covid 19 Ireland, a sense of community was missing in many regions, yet it’s very presence is seen as potentially a crucial quality to a happier life

In the face of an unprecedented crisis and danger to public health and safety, a sense of community spirit has re-emerged in Ireland that has focussed citizen’s minds on the importance of the collective as opposed to the individual. Neo-liberal social discourse no longer sees the welfare state as a burden on society, but more importantly as a treasured possession in supporting a nations citizen’s in a time of need.

Politically, at a time when trust was waning across many European democracies against the body politic, increased civic engagement and co-operation with government throughout the Covid 19 crisis has also renewed trust among citizens. The recent sharp increase in Taoiseach Leo Varadkar’s ratings is directly related to widespread trust and approval of government action in the fight against Covid. Not too long ago, the level of people’s faith in that same government was reflected in the February election results with calls for widespread change from many quarters.

Given the increased economic challenges and concerns that face our country, we need to recognise that working collectively as a community is the only way forward. As the community and voluntary sectors have proven in the fight against Covid 19, that they are vital partners with the State in the delivery of public services, any incoming government should recognise the necessity of their presence in future policy making.

Not only has the present crisis demonstrated the collective spirit of the Irish people, but it has also shown that countless citizens are ever willing to put their energies and skills into making things better for others and for the country as a whole.

Never again should a lack of time be used as an excuse for a lack of civic engagement. By delegating active community participation to fewer and fewer people, we all risk being impoverished, especially those who opt out and leave the responsibilities of real citizenship to others.

Dr Patrick McGarty is a Senior Lecturer in Public Policy at the Institute of Technology Tralee.

1 Taoiseach dramatically sacks Barry Cowen as minister over drink-driving controversy
2 Miriam Lord: What the actual...? Martin blooded as Taoiseach as he wields axe on Cowen
3 Michael McDowell: Brace yourself for what a desperate Trump might do
4 Covid-19: Ireland likely faces ‘imminent second wave’ due to reopening, experts warn
5 My aunt never told us that Gran passed away with no will
Real news has value SUBSCRIBE