Greens say government formation talks could be complete by June 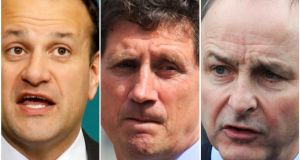 Green Party leader Eamon Ryan has said talks on Government formation could be completed by the end of the month with official negotiations due to begin on Thursday.

Mr Ryan said that the Green Party received clarifications from the two parties over the weekend that both are committed to the seven per cent reductions in emissions target over the course of the next decade.

According to the clarification given to the Greens, both Fine Gael and Fianna Fáil say they are “happy to confirm that a new government comprising our three parties will commit to developing measures to achieve an average 7 per cent per annum reduction in annual emissions for the next decade.”

The two parties also said they “want to discuss with you through talks on a Programme for Government, the measures that will be required to achieve such a target and to put these policies in place. It is important that there is clarity about how our targets will be met.

“A just transition is central to our approach to ensure that all regions and sectors can engage with innovative, progressive practices to encourage compliance as we work towards a net-zero carbon target by 2050 as outlined in the European Green Deal.

“It is important to both of our parties that in taking climate action we work with our agricultural sector, rural Ireland in general, business and industry.”

Fine Gael and Fianna Fáil also said they would seek to improve farmer incomes and “protect the family farm model as part of a European Green Deal and a revised Common Agriculture Policy.”

The two parties “fully accepted” that reducing emissions would provide “better air quality, a better future for all our people and improvements to our quality of life right across the country”.

“It will create jobs and allow for economic opportunities to develop across Ireland as a result of deep retrofitting, renewable energy, peatlands management and green technology.”

The meeting follows a vote by the Green parliamentary party on Sunday to enter formal talks, and takes place against differing background noise in the Fianna Fáil and Green Party organisations.

The membership of all three parties will be asked to approve a final deal, if one is agreed by negotiators in the coming weeks.

The Green Party leader has received fierce criticism on social media following the party’s decision, though there has also been significant support for the measure.

Mr Ryan received a boost on Monday when the deputy leader of the party, Catherine Martin, who voted against entering into talks on coalition, said she accepted the result of the parliamentary party’s vote and will ould engage “in good faith” with the talks process.

Speaking to The Irish Times, Ms Martin said she would support all efforts to arrive at the best programme for government possible and then make a judgment on whether to support entering into coalition on the basis of the document.

Ms Martin and others in the parliamentary party had wanted firm guarantees from Fianna Fáil and Fine Gael on a number of issues, including committing to a 7 per cent annual reduction in greenhouse gases, before agreeing to enter government negotiations.

Meanwhile, the Fianna Fáil members of Donegal County Council have written to Mr Martin to express their opposition to any coalition with Fine Gael and the Greens and have called for a national government as the best thing for the country and the party.

The chairman of the party’s Donegal councillors, Patrick McGowan, and the group’s whip, Ciarán Brogan, wrote to Mr Martin on behalf of all their colleagues warning that the party would be “destroyed” in the next local elections if it entered government with Fine Gael now.

The group also said it was opposed to a coalition with the Green Party.

Senior Fianna Fáil sources acknowledge that there is opposition to a coalition with Fine Gael and the Greens throughout the organisation, but say there is little evidence that it represents a majority view in the party.