Cork man saves toddler from choking on a jelly 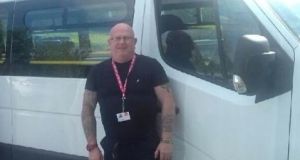 Paul Curtin has worked with Enable Ireland for over twenty years.

Tributes have been paid to a Cork man after he saved a three-year-old girl from choking on a jelly.

Paul Curtin, who has worked with Enable Ireland for over twenty years, was driving down MacCurtain Street in Cork city earlier this week when he spotted a woman in a car who he said was clearly panicking.

He noticed two children in the back of the car and decided to offer his assistance.

In an interview on the Neil Prendeville Show, on Cork’s Red FM, he said that he initially thought a bee was flying around the car. He wondered if he could calm the situation down.

“I have tattoos. I have one arm covered in them and I have a few on the other arm. And I have piercings. The mother kind of had a fright when she saw someone like that coming.

“She was in such a panic now that she couldn’t even open the door of the car.

“So I opened the door. I went in, opened the seatbelt, took the child out. I put the child over my knee and hit her a sharp slap in between the shoulder blades and dislodged what was in the child’s mouth.”

Mr Curtin, who is from Castlemagner in Co Cork, said he experienced a feeling of immense relief when the child took “ a big gulp of air” as her lips were going blue. He could see that the oxygen was draining from her face.

Mr McCurtin, who received first aid training as part of his job, handed the child back to her distraught mother and told her to take the youngster to hospital for a check up. He then returned to his car and headed to work.

Traffic in MacCurtain Street is normally hectic and he said if it wasn’t for the reduced cars on the street arising out of the coronavirus pandemic he probably wouldn’t have stopped.

“I would have driven on because the traffic would have just kept going on.”

Later that day as he was driving home from work a car pulled in front of him and he saw the mother of the child trying to flag him. She recognised him as being the person who had saved her child when she saw his arm tattoos.

She apologised to him for not expressing gratitude earlier, took his phone number and said she hoped one day to tell her daughter of his good deeds.

The woman’s husband subsequently contact Red FM to highlight Mr Curtin’s heroism. The radio station tracked him down and gifted him barbecue meats and a restaurant voucher.