HSE ‘quite keen’ to reopen nursing homes safely to visitors 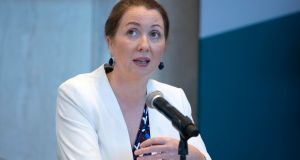 Dr Siobhán Kennelly, the HSE’s national clinical adviser for older persons, said the State’s public health officials were “quite keen” for the health of nursing home residents and staff – and the relatives of the residents – that nursing homes reopen to visitors “in a safe and controlled way”. Photograph: Colin Keegan/Collins

Reopening nursing homes to visitors so elderly residents can see their loved ones would “very desirable” as society reopens from the Covid-19 pandemic, a public official has said.

Dr Siobhán Kennelly, the HSE’s national clinical adviser for older persons, said the State’s public health officials were “quite keen” for the health of nursing home residents and staff – and the relatives of the residents – that nursing homes reopen to visitors “in a safe and controlled way”.

She noted that nursing homes have been trying “to do their own work” in reconnecting elderly nursing homes residents and their loved by permitting them to talk through windows.

Dr Kennelly said that “clinically” it would be “very desirable” for nursing homes to reopen and that it was “really critical” that nursing home residents get to see their loved ones again.

The nursing homes regulator Hiqa has urged the Government and public health officials to begin discussions on a plan to permit visitors into nursing homes safely and with restrictions.

Nursing homes have been closed to visitors since March in an attempt to protect the age group most vulnerable to the disease and the people who have borne the brunt of the virus.

There were 10 new deaths and 159 new cases reported by the Department of Health on Wednesday, bringing the overall death toll to 1,497 and the number of confirmed cases in the Republic to 23,401.

Elderly people living in residential care facilities and nursing homes account for 63 per cent of those who had died in the Republic.

Fianna Fáil leader Micheál Martin raised the prospect on Wednesday of carrying out an inquiry into how nursing homes had been affected. However, he said it should be done with a view to “learning lessons” rather than making people afraid to do their jobs during potential future crises.

People had tough choices to make in the “middle of a crisis”, Mr Martin told Virgin Media television

“If there is a crisis in 10 year’s time or five year’s time of another kind, you don’t want people looking over their shoulders all the time saying: ‘I am watching for the inquiry to make sure I do nothing wrong’. But nonetheless we have to evaluate that aspect of and other aspects of it: PPE (personal protective equipment), testing and contract tracing. We are not where we should be in relation to that.”

The State’s chief medical officer Dr Tony Holohan said he hoped that should public restrictions start to be lifted from Monday that it would lead people to go beyond further planned easing of restrictions.

He said that he would be concerned if people “start to have the barbecues and the parties and visiting each other’s houses” which public health officials would not be recommending.

“We have to be ready to catch that if that happens,” he said.

Dr Tony Holohan also said the State would have to find a way to live with this virus for quite some time.

The challenge of this virus to vulnerable groups “is not going away”, he said, so the State would have to “manage to minimise its impact on nursing homes and other settings on vulnerable people in the community.“

“We are going to have to try to find ways of learning everything so far protect that sector into the future,” he said.

There were 64 patients with Covid-19 in intensive care units, an ICU figure last seen back in March, reflecting a level of success in tackling the virus.

Further information was provided on the underlying health conditions of people infected with the coronavirus disease were admitted to intensive care units and who had died.