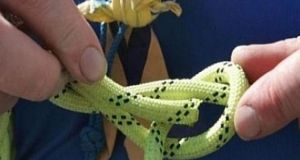 In 2018, The Irish Times revealed that Scouting Ireland’s handling of a rape allegation, concerning two adults, had been ‘deeply flawed’.

February 23rd, 2018: The Irish Times published a front page story revealing the details of a confidential review into Scouting Ireland’s handling of a rape allegation concerning two adults. The review, conducted by child protection expert Ian Elliott, found the handling of the case had been “deeply flawed”.

June 25th, 2018: A report by children’s rights expert Jillian van Turnhout, commissioned by Ms Zappone, concluded there was a “deeply rooted dysfunction” at the top of the organisation, due to a lack of transparency and a culture of “blind loyalty” to certain senior figures.

October 6th, 2018: Scouting Ireland members overwhelmingly pass proposals to overhaul the governance of the organisation at an extraordinary general meeting, and elect an entire new board.

November 21st, 2018: At an Oireachtas committee hearing it is disclosed an initial review by Mr Elliott had identified 108 alleged victims of historic child sex abuse, and 71 alleged abusers. The alleged abuse related to legacy bodies the Catholic Boy Scouts of Ireland and Scout Association of Ireland.

December 12th, 2018: The Irish Times reported that emerging evidence showed abuse had occurred “within all levels” of legacy organisations, and had been “covered up”, where people permitted known abusers to move from group to group. Large numbers of other survivors had also come forward, and the organisation had identified 317 alleged victims, and 212 alleged perpetrators.

February 18th, 2019: Tusla, the child and family agency, raises “serious concerns” with current practices in Scouting Ireland in a controversial letter. The agency criticised the handling of recent safeguarding cases and said the organisation should “consider the viability of continuing with overnight trips”. The details of the letter were made public in a Dáil speech by Ms Zappone several days later.

November 13th, 2019: Taoiseach Leo Varadkar states the Government was considering a “commission of investigation or statutory inquiry of some nature” into the abuse scandal, on foot of questions in the Dáil.

May 14th, 2020: The final report into the historic abuse scandal completed by Mr Elliott is published.