Is it safe to reopen schools? Other European countries are finding out 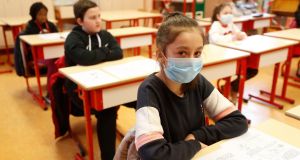 Schoolchildren, some wearing masks, attend a class in a school of Strasbourg, France on Thursday. Photograph:Jean-Francois Badias/AP

Across Europe, millions of children are returning to classrooms for the first time in months to schools which are radically transformed by strict hygiene and distancing rules.

There is a patchwork of approaches, creating a huge testing ground for how to safely operate institutions which are so central to the resumption of public life.

Just how our neighbouring countries manage the return of pupils is being watched closely by health and education officials in Ireland, where they have decided to wait until September before reopening.

Denmark was one of the first European countries to reopen its primary school almost a month ago. It was seen by some as a bold experiment which risked a second wave of infections. The result?

It announced recently that the reproduction factor of the virus remained below one and older students were allowed to return to school last Monday.

Teachers’ unions and school principals say the move has been a success and early indications are that it has no significant impact on falling infection rates.

All primary schools operating under strict rules aimed at limiting the risk of infections among children.

In classrooms, each desk is at least two metres apart. A maximum of 10 children is permitted in each class. These children are required to stay together during lunch break and play time and are taught by a single teacher.

Drop-off and collection of children takes place at intervals, while schools are using every available space - such as sports halls and even outdoor areas (weather-permitting) - as teaching area.

While some schools reported that a minority of parents did not want to return their children to school, many report that these concerns have eased after

“It’s an absolute quality stamp,” he said. “There are a lot of questions from parents and employees who need to be answered and that is only quite understandable . . . Clear and constructive communication between adults is crucial to the well-being, safety and learning of children.”

Most of the country’s pre-schools and primary schools began opening their doors to about 1.5 million pupils this week.

Administrators have been told to prioritise instruction for children ages five, six and 10.

In Paris, officials estimate about 15 per cent of the city’s students will be able to go back to school. Other towns and cities think they can serve about half of the children normally in preschool and primary.

Schools are guided by a 60-page document which provides detailed instructions over social distancing rules in classrooms and disinfecting surfaces.

Teachers, for example, are required to wear face masks and children’s chairs be separated. A maximum of 10 children are permitted in pre-schools, while it rises to 15 at primary level.

School attendance is compulsory and parents may keep children at home and teachers will provide lessons like they have during the nationwide lockdown.

Teachers are also required to juggle between face-to-face and distance teaching. Junior secondary schools are due to reopen on May 18th, while older children are scheduled to return on May 25th.

Following a two-week trial run in secondary schools which did not stop overall transmission numbers from falling, Germany has been reopening its schools since last month.

It allowed older children back to school first on the basis that they are better able to comply with rules on masks and distancing.

Schools have been transformed by new hygiene rules. For example, class sizes have been cut in half and students are taught on alternate days.

Despite the country's relaxed approach to children, Swiss primary schools are reopened under very changed circumstances

Breaks nowadays are staggered, with certain groups allowed out at certain tines, and hallways have become one-way systems.

Teachers are required to wear masks and students, in many schools, are encouraged to dress warmly because windows and doors are kept open for air circulation.

Pupils typically wear facemasks while entering and leaving, but most schools allowed them to be removed in the classroom.

One secondary school in Neustrelitz, a small town in northern Germany, has gone so far as requiring students to take twice-weekly self-administered Covid-19 tests. Any student with a green sticker is allowed move around the school without a mask - until the next test four days later.

The Dutch government has allowed primary school children to go back to school part time since the start of this week. Secondary schools are not due to open until June.

Class sizes and school hours have been cut in half with students spending the remainder of their time doing distance learning.

Each district is setting its own policies for reopening, with many accept students only on alternate days. At some schools, the teachers wear medical masks, while others have set up plastic shields around pupils’ desks.

Parents are required to drop their children at school gates and there one-way systems in operation at most schools.

Children are also allowed to practice sports again under supervision. Competitions, however, are cancelled.

Under these rules, young people between the ages of 13 and 18 may exercise together under supervision, but must remain a distance of 1.5 metres apart.

Older or vulnerable teachers do not have to return to work, while some schools have taped off a “safe area” for teachers at the front of the class.

Despite the safety measures, some schools report that as many as a third of parents are keeping their children at home.

Switzerland has made headlines due to its government’s belief that children up to 10 years of age are not at risk from the virus.

Authorities recently announced, for example, that it was safe for grandparents to hug their grandchildren.

Despite the relaxed approach to children, primary schools are reopened under very changed circumstances.

Regions have been given considerable autonomy in deciding what measures to take.

Many schools are splitting classes in half, with attendance trimmed to just two days a week per group, to accommodate that change.

There are also hand-sanitising facilities, while desks are being moved further apart and markings are being taped to floors to help children observe new space limits.

Secondary schools and university students, meanwhile, must wait until at least June 8th for classes to begin.