Consumers not obliged to accept vouchers for cancelled flights 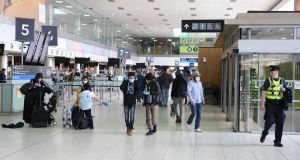 Traveller rights across the European Union remain unchanged despite the blanket cancellation of flights and holidays in recent weeks, Europe’s leading cross-border consumer group has confirmed.

March and April were the busiest months for queries and complaints the European Consumer Centre has ever had.

Over the past two months, across the centre’s entire EU-wide network of offices, consumer contacts jumped about 100 per cent. Almost all complaints coming from passengers anxious to establish how their rights were affected by Covid-19 travel disruptions and border closures.

The surge in queries started in mid-February and reached a peak at the end of April. Some 43 per cent of contacts were in relation to air travel as the commercial aviation industry experienced the most significant disruption in its history. A further 22 per cent involved hotel reservations cancelled in the aftermath of the widespread stoppage of travel and transport options and the imposition of border closures.

The European Consumer Centre said package holidays represented 19 per cent of queries while other issues were concerned with land and sea transport and cancelled events – mostly festivals, sporting events and concerts.

Initially, the queries focused on the impossibility of travel and passengers’ attempt to understand what their rights were as a result, but this was followed by a wave of complaints “directly related to the changing policies of various companies and countries in responding to the cancellations of transport and tourism services”.

A spokeswoman for the Irish branch of the centre said that in April and May most queries both in Ireland and Europe “pertained to difficulties encountered in securing cash refunds for cancelled package holidays, accommodation, flights, ferries, bus transfers, car rentals, recreational and sport events”.

She said the company was working to resolve disputes between consumers and traders but was also involved in “monitoring new changes to travel and transport companies’ policies and also coronavirus-related legislative changes in various EU member states, where national governments have introduced new emergency temporary rules of reimbursement”.

She stressed that while the coronavirus crisis was an “unprecedented situation … consumer air travel entitlements have not changed”.

If a consumer has booked a flight directly with an airline, or via a third party such as a booking engine or travel operator, and the flight was cancelled due to coronavirus restrictions, the airline is no longer required to pay compensation. But it is still obliged to respect the other basic air passenger rights – even under extraordinary circumstances, such as Covid-19 – including reimbursement.

She said airlines were required to refund passengers within seven days of the flight cancellation. She said consumers who did not receive a refund within this time scale should submit a complaint to the airline and then to the national enforcement body, which in Ireland is the Commission for Aviation Regulation. It deals with such matters on its dedicated website, flightrights.ie.

She stressed that under the provisions of Regulation EU 261/2004, when a passenger chooses a refund, this can be processed in cash or in vouchers, “but it is up to the consumer to accept the voucher or not”.

However, she also pointed out that Greece, Italy and Netherlands have implemented measures establishing an exceptional regime that allows air carriers to offer air passengers vouchers instead of cash refunds, provided the vouchers are fully refundable if not used during their validity period, which is usually 12 months. Minister for Transport Shane Ross is considering a similar change here.