Chris Johns: Firms cannot be set up to cope with systemic crises, but governments should be 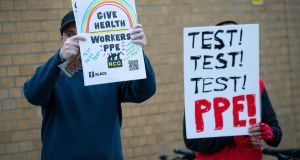 Governments should keep much more spare capacity, more redundancy: rather than just-in-time cost management, just-in-case is what is needed.

The best guide to the future is often to be found in the stock market. Even so, it’s only a cloudy crystal ball. That’s the difficulty with forecasting: it’s tough at the best of times, often impossible.

The Bank of England, for instance, attracted a lot of headlines for its “forecast” of the “worst slump since the 1700s”. The UK’s central bank was, in fact, at pains not to use the word forecast, preferring instead to describe “scenarios” and “projections”.

The US stock market has staged a remarkable recovery since its March lows. Other markets, notably Europe’s, have not been quite so exuberant. On the face of it, US equities are signalling a V-shaped economic recovery, something that the Bank of England suggested was also its central projection, if not quite a forecast, for the UK.

A closer examination reveals a US market recovery dominated by technology stocks such as Apple, Google, Amazon, Microsoft and Netflix. Some of these companies are at, or close to, all-time highs. The gap between the economic data and the stock market has, it seems, never been wider.

All analysts who take their cues from the real economy think the stock market is riding for a fall. Political commentators fret about the gap between Wall Street and Main Street.

The behaviour of technology share prices could, just about, be rationalised by a forecast that they will be the winners in the post-Covid-19 world. We are all Zoom addicts, box-set watchers and online shoppers. Equities more obviously linked to the dreadful economic data have done less well.

Some trends evident before the crisis hit are being accelerated. Technological change has speeded up. All those fears about robots taking over our jobs may about to be realised. If so, we will be confronted by a handful of mostly US companies that will soon be bigger and, arguably, more powerful than many governments. Perhaps we are already there.

Another pre-coronavirus trend ripe for acceleration is deglobalisation. The drive for economic growth and efficiency prompted an explosion in global trade and complex, just-in-time, supply chains.

The economic rationale for all this is still intact but strategic and social considerations are likely to dominate. The vulnerability of those supply chains is obvious. And we are now aware that while globalisation produced many winners, we ignored the losers.

We know a lot about companies built around global supply lines. Less attention is focussed on just-in-time public sector provision. This is about capacity, redundancy and risk management.

The abject US and UK handling of the pandemic, in particular, is the result of years of deliberate elimination of the state’s capacity to deal with a crisis. Forcing the public sector to do more with less, in a drive for economic efficiency mirroring corporate management practices, has denuded the state’s ability to do anything when the system it is supposed to manage malfunctions.

Companies cannot be set up to cope with systemic crises. Governments can – should – but too many choose not to. The emergency tool-kit was discarded. Cost cutting has its limits even for companies: keep cutting the fat and you will eventually reach much-needed bone and muscle. Governments should keep much more spare capacity, more redundancy: rather than just-in-time cost management, just-in-case is what is needed.

Financial crises, wars, political upheavals, plagues and pestilence are more common than we care to admit. The crisis-prone nature of capitalism may have added to the systemic fragility that is so evident from any history book. Those big tech companies won’t prepare us for the next crisis, only governments can do that.

Our individual choices will also be different, it’s not just about government. Two-week quarantine periods for cross-border travellers are becoming the norm: these, I suspect, will have less impact than the travel companies fear.

That’s because lots of people will simply choose not to travel, even if the rules permit. Tourism is going to take a long time to recover, even where there are no quarantine restrictions.

Environmentalism is another obvious pre-Covid trend that will be accelerated. Not flying plays to that and is another reason to be pessimistic about tourism.

This represents an existential threat to significant parts of the Irish economy of course. As does the threat to dairy farming: we will have a bigger impact on greenhouse emissions if we give up eating meat rather than flying. Lots of people could well end up doing both.

The biggest changes will come if more of us learn some numeracy. We clearly struggle with the mathematics of exponential growth. Academics such as Nicholas Taleb have been warning for years about “non-ergodicity” (don’t ask). Low probability, high-impact events need to be prepared for.

They also shouldn’t be encouraged, in the way that we do via the eating of animals. We are like a gambler who goes into a casino day after day, mistakenly thinking that while he might lose a bit, on average, he won’t be wiped out; he could even emerge a winner.

If we keep gambling via lack of preparation and risky behaviour we will, like that gambler, face certain ruin. Those big companies winning on the stock market need to be mirrored by big government.