Dubliner John Hemingway (100) fought in the Battle of Britain 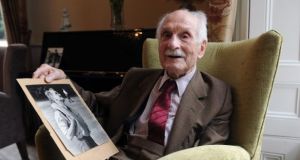 John Hemingway (100-years- old), who is the only surviving Irish Battle of Britain pilot veteran, pictured with a photograph of himself aged 20 in 1939 just after the outbreak of the second World War. Photograph: Aidan Crawley

Irishman John Hemingway is now the last of the second World War “Few” who fought in the Battle of Britain still alive.

It follows the death in a Yorkshire care home of Flight Lieutenant Terry Clark (101) on the eve of the 75th anniversary of Victory in Europe (VE) Day on Thursday.

The “Few” were so called by Britain’s wartime prime minister Winston Churchill in reference to the 3,000 men from the Royal Air Force (RAF) who repulsed the German Luftwaffe during the summer and autumn of 1940 and prevented a Nazi invasion of Britain.

Mr Churchill’s paid tribute to them in his much quoted speech in August 1940 in which he stated: “Never in the field of human conflict was so much been owed by so many to so few”.

The RAF Benevolent Fund controller Air Vice-Marshal Chris Elliot confirmed to the the BBC that Mr Hemingway is now the last surviving member of The Few.

Mr Hemingway (100) lives in a nursing home in Foxrock, Co Dublin. He was informed yesterday of the death of Mr Clark and that he is now the last survivor of the Few. He expressed his condolences to Mr Clark’s family.

After being accepted into the RAF, he began training in Brough, Yorkshire, in January 1939. Having completed flight training school, Pilot Officer Mr Hemingway was posted to No. 85 Squadron in Debden, flying Hurricanes.

Mr Hemingway was on the frontline during the Battle of Britain, a campaign which decimated No. 85 Squadron. He was shot down twice in August 1940. The first instance was while intercepting Junkers Ju 88s about 32km off Clacton-on-Sea in Essex. He was in the water for almost two hours before a rowing boat rescued him.

Over Eastchurch in Kent during an attack on Dornier bombers, his aircraft was damaged by tail gunners and he bailed over Pitsea marshes. His Hurricane P3966 plummeted from 5,000m and was buried in the soft, boggy soil of the marshes.

By September 1940, No. 85 Squadron had lost 11 pilots in action and had to be withdrawn. Mr Hemingway was awarded the Distinguished Flying Cross in July 1941, but the battle had taken its toll on the young pilot.

His commanding officer, Peter Townsend, famed for his later romance with Britain’s Princess Margaret, and described by Hemingway as a “first-class wartime leader in a fighter squadron”, was also good at recognising the signs of battle fatigue. Mr Hemingway was rested, with light duties, for two years.

He served as a Flight Controller during Operation Overlord, the Allied invasion of Normandy, in 1944. He was later restored to active duties as a Spitfire combat pilot and fought in the 1944-45 campaign in Northern Italy.

After the war, he served as a staff officer in the Middle East, he spent two years at the Air Ministry in London, and then as a senior staff officer at NATO headquarters in France. He then returned to England as station commander at RAF Leconfield in Yorkshire. He retired from the RAF in 1969.

He was one of 36 Irish pilots who fought in the Battle of Britain including Wing Commander Brendan ’Paddy’ Finucane, who was one of the RAF’s most successful fighter aces in the war, and Victor Beamish, a scion of the brewing industry. Both were killed in the war.

Last year he gave an interview to The Irish Times on the occasion of his 100th birthday.

He lives a quiet life in south Dublin, having returned to Ireland in 2011 after several years in Canada with his daughter. His decision to return was “one of my absolute correct decisions. I was always going to come back”.

His son, Brian, regards his father as “the lucky Irishman”. He currently lives in Dublin in a nursing home community. Speaking to The Irish Times, Brian felt that, at the age of 100, his father’s luck had yet to run out. “He feels lucky because he is well cared for in his nursing home, he is loved and not forgotten,” he said. “At a personal level and at a Royal Air Force level that gives him a certain comfort. He is very mindful of the thousands of other pilots who are not with us anymore.”

Regarding his father’s Irish identity as the last survivor of the Battle of Britain, Brian added: “If people feel proud to be British because of the part he played in the Battle for Britain, then he is proud.