Covid-19: Garda response to protests may be seen as ‘inconsistent’- Policing Authority 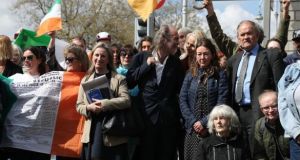 The Garda’s response to different sets of people protesting about different issues during the Covid-19 policing operation might be seen as “inconsistent” and “unfair”, the Policing Authority has said. It added it planned to study the issue and report on it in the future.

The Policing Authority did not specifically reference a protest by Debenhams workers and an unrelated protest by supporters of journalists Gemma O’Doherty and John Waters but the Irish Times understands it was referring to those protests.

Debenhams workers were protesting outside the store in Dublin’s north inner city last month after they lost their jobs. Gardaí quickly moved in and dispersed them; breaking up their protest on the basis they had made a non-essential journey to be there.

However, the supporters of Ms O’Doherty and Mr Waters have been able to congregate in numbers without social distancing when the two journalists have appeared in the Four Courts, Dublin, as part of their legal challenge to the legality of the Covid-19 lock-down measures.

“There is an inescapable risk that (Garda) engagement in particular instances will be perceived as uneven, inconsistent or even unfair, particularly where circumstances that may be different can appear to the public to be the same,” the Policing Authority said of how different sets of protestors were being managed from a policing perspective.

“While we have observed a level of co-ordination, internal review and reflection, in some of these matters, Garda investigations are ongoing and once further information is received, we will consider and report as appropriate.”

The Policing Authority made its remarks in its latest weekly report about the Garda’s Covid-19 policing operation. It is also tracking and reporting on how often the force was using the new powers conferred on it to respond to those not complying with the public health restrictions in place to combat the spread of the virus.

Authority interim chairman Bob Collins said he and his colleagues on the Garda watchdog agency were “appalled by the number of threats to spit at Garda members and by the occasions when such threats have been carried out”.

“But it reiterates its strong view that there should be an unambiguous commitment to use these devices only for the duration of the current emergency,” he said.

“That commitment should be wholly independent of whatever review is undertaken in September,” he added, of proposals the continued use of the hoods post-Covid-19 be reviewed with a view to retaining them.

During a meeting last week between the Policing Authority and Mr Harris and his senior officers, conducted via video link, authority member Vicky Conway said concerns had been expressed about armed gardaí manning checkpoints where compliance among the public with the health restrictions in place was being checked.

The authority notes in its report issued on Friday that Mr Harris had explained to it armed gardaí were being used because a major policing operation was underway and every resource at his disposal had to be used.

Echoing the views express by Ms Conway last week, the authority’s report expressed concern that this practice of using armed gardaí for regular policing tasks in the community should not become normalised.

“Concern remains that this type of activity would become routine, rather than exceptional,” the authority notes in its report.

The authority also believed the Garda should devise ways of recording the ethnicity of suspects and victims it dealt with, especially to determine the ethnic breakdown of people on whom spit hoods were used and the ethnicity of domestic violence victims the Garda was regularly in contact with.