Consultants on €50m waiting list initiative must be specialists 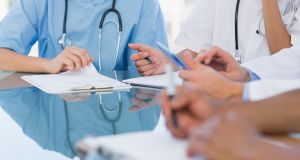 Consultants providing treatment to patients under a new Government-funded €50 million initiative to reduce hospital waiting lists will have to be fully-trained specialists. Photograph: iStock

Consultants providing treatment to patients under a new Government-funded €50 million initiative to reduce hospital waiting lists will have to be fully-trained specialists, it has emerged.

The on-going controversy over non-specialist-doctors in specialist positions in both public and private hospitals has intensified over recent days after it was revealed that there were 650 consultants who were not on the Medical Council’s register of specialists.

On Monday the Irish Medical Organisation said that given the Government was now subsidising private hospitals through its new €50 million waiting list initiatives, it had a responsibility to address the issue in both the public and private sectors.

The National Treatment Purchase Fund (NTPF), which is to spearhead the Government’s drive to reduce waiting lists by delivering 20,000 in-patient/day case treatments and 4,000 gastrointestinal scopes this year, said it required “ all treating consultants performing NTPF-funded procedures to have a specialist registration in the relevant speciality”.

Separately the country’s largest health insurer, VHI, re-stated that it would not pay out in cases where services were provided to its subscribers by consultants not on the specialist register.

It said this applied to consultants both in public and private hospitals.

On Monday the Minister for Health Simon Harris warned that public and private hospitals could face closure in the future if they continued to have doctors without specialist training working in consultant positions.

He said that under new legislation all hospitals would be obliged to have licenses in order to operate.

He envisaged that as part of this licensing process hospitals would have to comply with requirements for consultants to be on the Medical Council’s specialist register.

However Mr Harris said the proposed new licensing arrangements would not come into effect before 2022.

Under the provision of the new legislation, which was unveiled by the Minister a number of months ago, it would be an offence for public or private hospitals to operate without a licence.

Mr Harris said of the 650 active medical consultants who were not on the specialist register, about 120 were employed in the public system with the remainder in the private sector.