In London, he played for those who dreamt of an idealised Ireland that never was 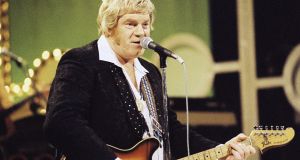 Big Tom McBride would have been bemused or maybe bewildered being compared to fellow Monaghan man poet Patrick Kavanagh after his death was announced on radio yesterday.

As a teenager I met Kavanagh in Dublin and he was curmudgeonly; I was told his grumpiness was because he was an unappreciated and penniless artist. Whereas I often met Big Tom and he was always agreeable and grateful for the material success that followed his enormous popularity.

His success was phenomenal and he was a phenomenon in rural Ireland – the antithesis to the loud rock bands with long hair, the role models for urban Irish teenagers in 1966.

His first record, Gentle Mother, was a hit when he was a saxophonist with the Mainliners showband in 1966. After that he rarely bothered the saxophone, fronted the band and became enormously successful – an unlikely heartthrob for women, and his unthreatening sexuality allowed men to like him.

My job as a reporter on the weekly showbusiness magazine Spotlight gave me an insight into the unique phenomenon of Big Tom and the Mainliners in the early 1970s.

Back then I contacted Big Tom by phoning Rockcorry 15 to reach his manager John McCormick, the local bread delivery man, who was unfailingly helpful and very shrewd.

The band was usually paid 60 per cent of the admission price and took home huge amounts of folded currency to Monaghan in an era when cash was king. Big Tom packed ballrooms from Donegal to Waterford and all the counties in between – but “house full” signs were on the doors of venues in Dublin, Belfast and other cities where rural people had moved to work.

Watching as many as 4,000 rural Irish men and women paying homage to Big Tom shoe-horned into the Galtymore in Cricklewood in London was an unforgettable and very moving experience: he was their hero and they were his people. Big Tom had worked on building sites in the UK when he was younger. A lot of the men were navvies and the women in domestic work, strangers in a strange land dreaming of an idealised Ireland that never was and is never likely to be.

The titles of his hit songs reflected the unapologetic mawkishness of the lyrics – Broken Marriage Vows, The Sunset years Of Life, Back to Castleblayney. And an unbroken chain of hit records led to the ultimate tribute from county singer Susan McCann in 1980 Big Tom Is Still The King; it topped the Irish best-selling charts for a month.

Big Tom’s records were released on the Denver label that he owned with business partner, songwriter John McCawley, and he was presented with a Gold Award for more than one million sales in 1980. And nine years later Big Tom and the Mainliners were reunited on stage at the Oasis (billed as Ireland’s biggest nightclub) in Castleblayney and a reported 4,000 fans paid at the door.

Success inevitably generates envy and often derision, and Big Tom and the Mainliners were the butt of jokes from other bands that were often more accomplished musically but failed to attract an audience, whatever about adulation. The ridicule must have hurt and when they responded to the jibes, it was never direct. The band and the big fella would remark cryptically that they “hadn’t seen a floorboard for years” – a reference to ballrooms wall-to-wall with dancers everywhere they appeared.

There were no sides to Big Tom: the appeal of his songs was unashamed sentimentality; he had no time for smart-alecs. And the closest he came to irony was an enormous guitar in wrought iron on the gates of his family home near Castleblayney.

He was very shy – not retiring, or reclusive or whatever euphemism is used to describe more sophisticated artists who repel any intrusion of their privacy. No, Big Tom dreaded interviews with journalists although he was never anything but polite and pleasant. I don’t think he could articulate in a manner that he thought was expected of him; I believe he reasoned that the lyrics of the songs he sang spoke for him and he had nothing further to add.

The death of his wife Rose in January when he was 81 years old is said to have broken his heart in the same way that hearts are broken in the songs he sang. She was his rock: he relied on Rose and their close-knit family to make sense of the fame and fortune that continued to surprise him after 52 years.

Big Tom McBride would have been astonished then extremely proud of the President Higgins’ message of sympathy to his children Thomas, Dermot, Aisling and Siobhán yesterday.

And a generation of children to whom Big Tom was the matchmaker for their parents should remember him with gratitude.

Sam Smyth, columnist with the Irish Mail On Sunday