€250,000 in cash stuffed into mattress seized during Garda raids in north Dublin 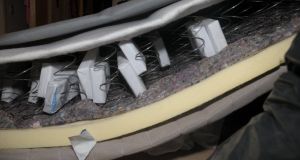 A photograph showing packages hidden in a mattress in a house in Dublin searched by gardaí during raids on Tuesday. Photograph: An Garda 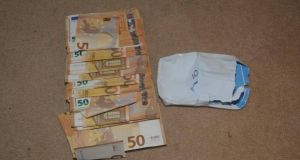 Some of the cash seized by gardai during raids on houses in north Dublin on Tuesday. Photograph: An Garda

Gardaí have arrested six people and seized drugs as part of an inquiry with authorities in Australia and New Zealand into the activities of the Kinahan crime gang.

On Tuesday, the Drugs and Organised Crime Bureau headed up the operation in Dublin, which focussed on suburbs on the north side of the city.

Residential addresses have been searched in Finglas, Artane, Drumcondra and Swords, north Do Dublin.

At one address an estimated €250,000 in cash was found and seized by the Garda. It had been placed into envelopes that were stuffed into a mattress.

That cash had come from cocaine sales in Australia and New Zealand, where young Irish people had been targeted as customers.

They were being questioned under Section 50 of the Criminal Justice Act, which allows for their detention without charge for up to seven days.

The legislation is used in investigations targeting significant organised crime groups. Another suspect has been arrested in Dublin in recent weeks though nothing was known of that before now.

Garda believe the Kinahan gang is supplying drugs to the Australian market and that a well known Dublin drug dealer has organised for some of his associates to go to Australia to help oversee the distribution of the Kinahan cartel’s cocaine.

One of the men arrested in Ireland is the main target of the Garda operation. He is very close to the Dublin drug dealer helping the Kinahans find trusted Irish people to send to Australia.

Gardai and the Australian authorities are investigating him on suspicion of selling drugs in Australia. And gardai also believe he has connections to a number of Dublin socialites and has been supplying cocaine to them.

The six people arrested yesterday are persons of interest in the repatriation to Ireland and laundering of the proceeds of the sale of the Kinahan gang’s cocaine in Australia.

It is not the first time the gang has been linked to the Australian cocaine trade. Some of the suspects arrested in Dublin today had recently spent time in Australia.

Last September, when a 20kg consignment of cocaine was found on a Brisbane building site, it was linked to the Kinahan gang.