If no progress on ‘backstop’ wording by June, UK withdrawal treaty at risk, says Coveney 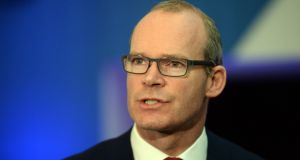 Tánaiste Simon Coveney: “We are putting down a marker which says that if there isn’t significant progress towards trying to find a wording that puts in place an operational backstop in the withdrawal treaty, well then we’ll have to ask some very serious questions...” Photograph: Cyril Byrne

Tánaiste Simon Coveney has said that the Government is “putting down a marker” on the need for progress in Brexit talks about the Border.

Speaking in Luxembourg, Mr Coveney, who is also Minister for Foreign Affairs, said that unless substantial progress was made by June with the British government in enshrining the Border “backstop” arrangement in law, then the efforts to agree a withdrawal treaty to govern the UK’s exit from the EU will be in jeopardy.

Mr Coveney’s comments mark a noticeable hardening of the Irish position amid concern that British commitments about maintaining an open Border will be long-fingered until the autumn.

“We are putting down a marker,” Mr Coveney said, “which says that if there isn’t significant progress towards trying to find a wording that puts in place an operational backstop in the withdrawal treaty, well then we’ll have to ask some very serious questions as to whether it’s possible to do it by October.”

October is when the EU and the UK hope to finalise a treaty to govern the UK’s withdrawal from the union, and which will include a transition period to allow for the details of the future relationship to be worked out.

The British government has promised that, in the absence of an agreement on the future of the Border, it will maintain the same rules North and South, allowing goods to move freely – the so-called backstop arrangement.

The Government is insisting that the British commitment be specifically written into the withdrawal treaty in legally binding language, but little progress has been made.

As he left Luxembourg for London, where he had a number of meetings with British ministers scheduled, Mr Coveney said that if there was not significant progress towards an agreement on the Border then “there will be difficulties in June”.

Asked if no agreement by June would put the transition period at risk, Mr Coveney said: “It puts everything at risk.”

He said the chief EU Brexit negotiator Michel Barnier had been “very clear, and I have too: there will be no withdrawal agreement if there isn’t a backstop relating to the Irish Border . . . and the political commitments in December.

Both sides have committed to a transition deal to avoid a “cliff edge” Brexit by maintaining the status quo until December 2020, despite the UK being set to leave the EU in March 2019.