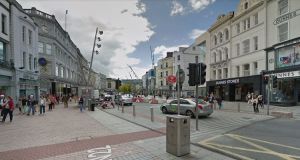 Cork City Council should consider asking Bus Éireann to abandon cross-city services that use the city’s main thoroughfare, Patrick St, and instead open it up to private cars, a city trader has suggested.

Jeweller Ronan Kennedy, who trades on Winthrop St, told a meeting of the Cork Business Association that the current ban on private cars accessing Patrick Street from 3pm until 6.30pm was done with the intention of freeing up the street for public transport.

But the move has led to buses getting caught up on traffic jams on the adjacent quays as more private cars are being diverted in streets like Merchant’s Quay, Lavitt’s Quay, Cornmarket Street and Washington Street leading to greater congestion, he said.

Mr Kennedy suggested that it might be more sensible for Bus Éireann to examine its existing route operations and rather than having buses crossing the city centre via Patrick St, it might be more beneficial not to allow buses access Patrick Street and leave it free for cars in the afternoon.

Mr Kennedy’s suggestion was just one mooted by members of Cork Business Association who are frustrated with the afternoon ban on private cars in Patrick St which they say is leading to a drop in footfall and trade and could lead to many family owned shops going out of business.

The decision to ban private cars is part of the Cork City Centre Movement Strategy and is based on studies which found that 66 per cent of all traffic entering Cork city centre is doing so to go elsewhere.

According to figures from Cork City Council’s Traffic Division, 10,900 vehicles a day use Patrick St and of these, 2,900, including 260 buses, were using Patrick St between 3pm and 6.30pm prior to the introduction of the ban on private cars.

“Two thirds of the traffic entering Cork city centre has a destination outside the city centre. There is no on street parking on weekdays, so Patrick St is only a destination for vehicles loading or unloading, buses and taxis,” said a Cork City Council spokeswoman.

Meanwhile the Green Party in Cork has welcomed the afternoon private car ban on Patrick St with the party’s spokesman in Cork North Central, Oliver Moran urging Cork City councillors to show leadership on the issue amid controversy and opposition from city centre traders.

“This is the greatest single change to traffic in the city centre for a generation. It’s bold and it’s visionary. Cork city centre desperately needs a vision that will attract new residents, businesses and visitors. All around Europe cities are providing more car-free spaces. That’s why we’re backing it.”

“The plan does have teething problems and people are worried about it for all sorts of reasons, some of which we’ve highlighted already. That’s all the more reason it will take leadership - leadership to listen, to make changes, to win people over, and to make it work.”

Meanwhile members of the Cork Business Association, which represents around 200 mainly city centre traders, are due to meet this evening after they rejected a plea from Cork City Council CEO Ann Doherty to allow the new system to bed in but instead called for its immediate cancellation.