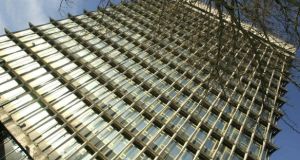 It’s no exaggeration to say that Cork County Hall has always been held literally in high regard by Corkonians but then that’s no surprise - for four decades it was Ireland’s tallest building and today Cork County Council commemorated its opening 50 years ago with a special exhibition.

Today at a reception to launch the exhibition entitled “From Inception to Completion”, Mayor of Cork County, Cllr Declan Hurley and Cork County Council Chief Executive, Tim Lucey marked the historic occasion with the unveiling of a special commemorative plaque.

Mayor Hurley pointed out that prior to the opening of Cork County Hall - which took three years to build - Cork County Council used to hold council meetings at the Courthouse on Washington Street while various council departments were dispersed in a variety of locations.

“A space was required which would provide a one stop destination for members of the public to transact with the Council. Cork County Hall was this solution - it was built to serve the people of Cork but it is also a building that has become a cherished part of the environment of Cork,” he said.

Soaring 16 storeys tall to a height of 64.3 metres, the new building on the Carrigrohane Straight on the western fringes of Cork city superseded Dublin’s Liberty Hall as the Republic’s tallest building, a record it was to hold until 2008 and the building of the 68 metre high 17 storey Elysian, also in Cork.

Among those to attend the unveiling of the commemorative plaque today were the late Mr MacSweeney’s widow, Honor and daughter, Fiona and relatives of the late Michael Conlon who was Cork County Manager and first mooted the idea of a new administrative centre for the council.

The latest of Mr Conlon’s successors in the role, current Chief Executive, Tim Lucey spoke of how the elegantly proportioned skyscraper was built a rate of a storey every three weeks as the design involved precast concrete tracery which eliminated the need for scaffolding during construction.

Mr Lucey recalled how over the years the original distinctive concrete facade became severely eroded and a refurbishment and expansion in 2006 saw the addition of an extra storey to bring the building to 67 metres with a glazed pavilion offering panoramic views across Cork.

“Cork County Hall was built to provide a single destination for service provision. We continue to provide services in the way that suits the people we are here to serve. We are now online and able to transact with the people of Cork 24 hours a day, 7 days a week.”

“The addition of the Cork County Council Library Service Headquarters in 2010 was another milestone for the council, bringing a focal point to the County Library for the first time since its establishment, some 84 years earlier,” he added.

Mayor Hurley recalled how the County Architect, Patrick MacSweeney had predicted at the official opening exactly 50 years ago, that the success of those involved in Cork County Hall would be judged by the present and future generations.

“There was immense pride in Cork County Hall in 1968. That pride remains and if anything has increased. I am confident that future generations will continue to take pride in this building, which is much more than a building. It represents the people of Cork and I for one take great pride in that.”