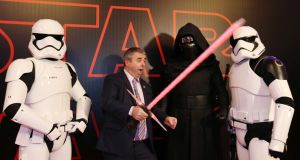 Kevin “Boxer” Moran at the premiere of Star Wars: The Last Jedi last December. The TD is locked in battle with his colleague Seán Canney over the position of Minister of State for the Office of Public Works. Photograph: Sam Boal/Rollingnews.ie

The Independent Alliance has considered holding a vote that would effectively see three of its members settling a dispute between the remaining two about who should be a Government minister.

Two members of the five-member alliance – Kevin “Boxer” Moran and Seán Canney – made an agreement two years ago to rotate the position of Minister of State for the Office of Public Works between them.

When the Fine Gael-led minority administration took office in May 2016, they decided by way of coin toss that Mr Canney should take the job first for one year. Mr Moran took over last June.

However, a dispute has arisen between the pair as the second anniversary of the Government’s taking office approached.

Mr Canney, a Galway East TD, maintains the ministerial post should revert back to him, while Mr Moran, a Longford Westmeath deputy, believes the agreement was that Mr Canney would have the job for one year only.

Sources said it has been floated within the group that all five members would hold a vote on who they believe should take the job.

Given that Mr Canney and Mr Moran are certain to vote for themselves, it means the founding members of group would decide who gets the disputed job.

It is not clear if it was proposed that the ballot of the five TDs would be done in secret or would instead be a show of hands, nor is it clear if Mr Canney was aware of these discussions.

Numerous sources told The Irish Times the idea of a vote has been floating as the dispute between Mr Canney and Mr Moran shows no sign of being settled.

One said it has been “kicking around” but added there is a reluctance to opt for a vote because of fears it may prove too divisive. But, the source added, the group may be left with no other option.

“It might yet come to that,” the source added. Mr Canney declined to comment. Mr Moran said there is “no row”.

Ten new advisers to junior ministers to be appointed despite previous Government decision 12:57
Deported man says he has lived in airport for months 12:47
Judge orders release of woman who poses ‘imminent’ risk to mother 12:19
Flu vaccine delay should be resolved by end of October - IMO 12:18
Covid-19: Restaurant industry left ‘in a vacuum of the unknown’- RAI 12:06