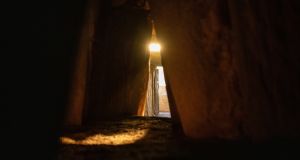 Ireland’s shortest day of the year will not fall on December 21st this year. Photograph: John Lalor/NMS

A group of competition winners arrived in Newgrange on Saturday morning hoping to see the chamber fill with light for the winter solstice, which this year falls on Sunday.

Kevin ‘Boxer’ Moran, Minister of State with special responsibility for the Office of Public Works (OPW) welcomed the winners of the winter solstice lottery to Newgrange.

Groups enter the chamber on different days every year from December 18th to the 23rd.

December 21st is often considered to be the shortest day of the year and usually the date of winter solstice celebrations. However, the exact date of the shortest day in this part of the world varies every year.

The winners were from as far away as Canada, Norway, Italy and Britain.

In addition to Saturday’s group’s prize being a day early, clouds blocked the sun which prevented light making its way into Newgrange’s chamber.

Normally, during the winter solstice the dawn sun’s rays shine through a deliberately built roof box above the entrance to the passage tomb. Over the course of approximately 15 minutes the beam of light gradually work its way up the floor of the passage to light the burial chamber.

He took some of the images over three mornings leading up to the December 21st.

In 2019, the shortest day will be on Sunday, December 22nd, when we will have less than eight hours of sunlight.