For some Irish emigrants, New York has been a fairy tale 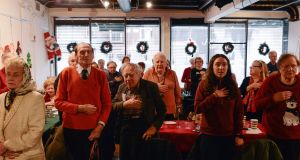 It’s a baltic afternoon in late December, but the windows of the New York Irish Centre (NYIC) have fogged over from the warmth within.

Plates heavy with potatoes, ham, turkey and other festive fare are being handed out to a sea of regulars in red and green who gather at tables to eat and catch up. They later fall pin-drop silent when seanchaí Danny Larkin stands up to recite Eamon Kelly’s The Season of Light.

Later, there is dancing and singing, including a rendition of Silent Night as Gaeilge, along with other well-worn favourites like Sweet Tralee and My Own Dear Galway Bay.

While the image of a wistful emigrant thrown in a New York “drunk tank” on Christmas Eve has become a nostalgic touchstone at this time of year, most of those present are from the generation whose arrival here preceded The Pogues’ Fairytale of New York by about three decades. They came by boat or plane, and were among the wave of post-war Irish who set off for the United Kingdom or the United States to enhance their economic prospects and escape the so-called “decade of doom”.

In her 2001 book, Irish Immigrants in New York City, 1945-1995, New York University professor Linda Dowling Almeida wrote that 68,151 Irish people came to America between 1941 and 1961, and that “between 1958 and 1961, more than a third of all Irish immigrants admitted to the United States went to New York City, and of those migrants admitted to major cities, at least half chose New York.”

“To many of the migrants of the 1950s, America was a land of wonder. Speaking thirty to forty years later, emigrants recalled the lights of New York City, the tall buildings, the abundance and variety of food, the speed of city life,” the book said.

“The contrast was striking. America was alive with energy and youth and promise,” the book said, and “those who were leaving Ireland wanted to move on – to jobs, a family, to a future.”

While measures of success can be hard to quantify, on an anecdotal level, the regulars at the NYIC appear to have had no regrets, and were able to push past feelings of homesickness and loneliness to build lives here, often ending up in Irish-centric enclaves like Woodside in Queens.

Tommy Ring, who left Millstreet, Co Cork in 1957 as a “strapping young lad” at the age of 20, was motivated by the same thing that drove so many of Ireland’s youth over the Atlantic at that time: opportunity.

In New York, he found it in the form of a career spanning 43 years as a ramp serviceman in two of the city’s major airports; 10 of them at JFK and 33 at its sister airport, LaGuardia.

And unlike the diaspora of the previous century, there wasn’t as much of a sense of finality in moving to the US.

“I used to go back to visit [Ireland] twice a year,” he said, referencing one of the perks of working for the airports. “We got free travel after 15 years.”

John Houlihan (79) joked that he left Ringsend in 1970 because “they told me money was falling off the trees... and I filled a couple of wheelbarrows.” He spent 25 years as a conductor with the city’s transit authority. “It was a city job, a steady job, and as long as you kept your nose clean, you had a job for life,” he said. He also used to visit Ireland every few years, but week to week, his connection with his former home is through meet-ups like this, where he can discuss the latest Gaelic football or hurling results with his friends.

Census data from 2017 shows that just 17 per cent of those who identify as Irish are above the age of 65.

Paul Finnegan, executive director of the NYIC, said there’s been a noticeable decline in the numbers of Irish-born visitors to the centre over the past few years.

“A lot of the native Irish are passing. If we went back a few years, there was a larger number of native Irish,” he said. Behind him hangs a photograph of one of the centre’s regulars, who passed away just six weeks ago.

The centre, which opened in Long Island City in 2005, has a number of programmes from fiddle classes to an LGBT meet-up. It also tries to engage with the rest of the community, particularly to combat loneliness as people age.

“We do word of mouth, and we publish [activities] in parish bulletins,” he said, noting that in addition to the midweek lunch, there is a focus on encouraging the elderly to come by on the weekends for computer literacy courses, to attend other classes, or just have a chat.

“We have widows and widowers; some have family who moved away. Some people here are in their 80s. At the weekend there are a couple of things they can do and have somewhere to go. Isolation is the biggest threat that faces seniors so we’re wary of it and we try to make as much of a connection to the people who come here. If we hear they are out there, or there are people who used to come here and stopped, we are tracking them as well,” he said.

Kathleen Dignan, from Co Galway, took the Corinthia across the Atlantic, arriving in New York on December 7th, 1959 after a week’s sail. As the years passed, she got married and had a family, and would visit Ireland every few years.

“I love meeting people from home,” she said. “We are fading away, years go by and life is getting lonely. We have a lot of funerals.”

For her and the other retirees here, the centre provides a place to gather, reminisce and share the emigrant experience which, at least on this day, involved a lot of looking back.

Westmeath-born Tommy Sheils was only 18 when he arrived; October marked 60 years since his emigration from Ireland.

“Good times, never regretted it,” he said with a subtle but unmistakable American lilt, a nod to so much time spent here. “Alright, I was lonesome when I got here first; leaving your whole family in Ireland and coming to a country... but then you meet friends and different people from Ireland... we did alright.”