Priest says most Christmas hymns a load of ‘holy smoke’ 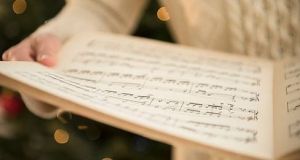 Phrases in hymns such “a calm, bright and holy night” and “a child so tender and mild” were “holy smoke to most people today”. Photograph: Getty Images

The time has come “to eliminate or rewrite most of our Christmas hymns”, a Dublin Oblate priest, psychologist and author,has said.

References to “a calm, bright and holy night”, “a child so tender and mild”, “heavenly hosts and heavenly peace”, “God rest you merry gentlemen” and similar phrases in the hymns sung by generations were “holy smoke to most people today”, said Fr Desmond O’Donnell.

“While many of the words inspired or were helpful to an older generation they are now meaningless,” he said.

Examples he offered included phrases such as “Son of righteousness”, “choirs of angels”, “redeem thy captive Israel”, “O come thou dayspring bright”, “gavest thy folk the ancient law”, “O come thou branch of Jesse”, “draw the quarry from the lion’s claw” and “glory flows from heaven above”.

“At Christmas many people – especially the young – accompany their families or their friends to church for whatever reason,” he said. It was a time “when attempts can be made to rescue religion from irrelevance and to strengthen the flickering flame of faith for many who are struggling to believe”.

It helped then “when words used by priests or pastors and those in hymn books make sense to the occasional visitors”.

“Yet all ten of the most used Christmas hymns are sprinkled with, or maybe filled with, words and phrases that are unhelpful or meaningless even to thoughtful believers,” he said.

These were “hymns or parts of them which verge on being meaningless to most of us. This is truer to those struggling to believe, but more especially to young people. When words and phrases look meaningless, disbelief can even be reinforced,” he said.

“These now meaningless words and phrases were all meant to somehow introduce us to a revolutionary and to a revolution; to tell us about the birth of a child who as a 12-year-old would question religious leadership , who would eventually upturn an entire religious system and declare their temple a thing of the past,”Fr O’Donnell said.

“He invited those who wished to follow him not just to celebrate his life and to sing hymns, but to lead a life of unselectively loving others, of unquestioning forgiveness.”