Clancy inquest: ‘It came too late for Geraldine and Louise but will save somebody’ 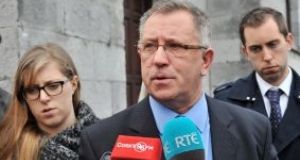 Noel Clancy, flanked by his daughter Fiona and son Delan pictured at Mallow Coroner’s Court, Co Cork, following the inquest into the death of his wife and daughter Geraldine and Louise Clancy. Photograph: Daragh McSweeney/Cork Courts.

Relatives of Geraldine and Louise Clancy, who lost their lives in a car crash involving an unaccompanied learner driver, have welcomed a recommendation from an inquest jury that gardaí be empowered to impound cars of those found driving without a full licence.

Noel Clancy, of Leitrim, Kilworth, Co Cork, said he hoped the Minister for Transport would enact the necessary legislation before the end of the year.

“We are living a life sentence of loss - there is no question about that - there is not an hour, a minute, a second that we don’t think about Geraldine and Louise and for some good to come out of this,” he said. “I think Louise would be delighted with that - she wanted to make life better for everyone.”

Speaking after the inquest into his wife and daughter’s deaths, Mr Clancy, flanked by his son Declan and daughter Fiona, said that under existing laws gardaí issued a fixed penalty point notice and a fine to an unaccompanied learner driver but they could then drive off.

“The guard has to have the power to get the car off the unaccompanied driver - this recommendation from the jury is too late for us but hopefully it will save lives down the road and I would hope it would be enacted before the end of the year.”

Mr Clancy told the inquest he stood on top of his wife’s upturned car and helped attach chains to it so it could be pulled out of the flood drain it landed in after the crash. He said he had not realised his wife and daughter were in the vehicle.

Mr Clancy said he hoped gardaí would be proactive when it came to the amendment, which was passed in the Dáil in December to hold car owners responsible.

“If there is a fear in people that they are going to be prosecuted and that their name on the paper, maybe they won’t do it,” he said.