Party leaders, among others, discuss a motion of confidence in the government, brought forward by Sinn Féin, during a long night in the Dáil. Video: Oireachtas TV 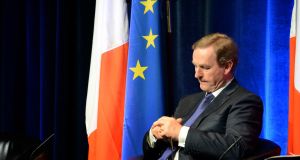 Enda Kenny at The Mansion House, Dublin, on Wednesday: Leo Varadkar told a Fine Gaal party meeting they needed to discuss election preparations soon. Sources said this effectively offers a timeline for Mr Kenny to indicate when he will stand down. Photograph: Eric Luke/The Irish Times

Taoiseach Enda Kenny will face a leadership challenge next week if he does not give a firm indication of when he will step down, Fine Gael sources have said.

The Government survived a confidence vote in the Dáil on Wednesday night 57 votes to 52 but the fallout from the Garda whistleblower affair continued when senior Fine Gael figures put the Taoiseach’s continued leadership of the party on the agenda.

Mr Varadkar added that the party needed to have an early meeting of the parliamentary party – at one stage asking for another meeting on Thursday – to discuss election preparations. Minister for Health Simon Harris echoed their calls, as did several backbenchers.

Fine Gael TDs, including sources close to both men, interpret this as a signal to Mr Kenny that he will face a challenge if he does not indicate a definite timetable for his departure. The party’s deputies believe they cannot fight an election with Mr Kenny as leader, and the Taoiseach has said he will not seek to lead the party in the next election.

Both Mr Varadkar and Mr Coveney had sought to quell the anger among TDs in recent days but now believe a leadership change, sooner rather than later, is inevitable and desirable.

Sources close to Mr Varadkar said the “ball is now in his [Mr Kenny’s] court”. While it was stressed that Mr Varadkar himself will not organise a motion of no confidence, a number of TDs said they would.

Mr Kenny was facing widespread criticism from his TDs for his handling of the Garda whistleblower controversy, which brought the Coalition close to collapse. However, many believe the Taoiseach should be allowed to travel to Washington to visit US president Donald Trump on St Patrick’s Day, and then given the space to stand down himself.

There are already three bodies which oversee the gardaí and investigate wrongdoing – the Policing Authority, the Garda Inspectorate and the Garda Síochána Ombudsman.

The alliance declined to express confidence in the Taoiseach. Minister for Transport Shane Ross said it was not appropriate to comment on his leadership when they had agreed to support a motion of confidence in the Government.

The Fianna Fáil leader Micheál Martin told the Dáil the confidence and supply deal between his party and Fine Gael, which underpins the minority Government’s ability to win votes in the House, was now “under serious strain”.

However the party would abide by the agreement as long as there were no “bad faith” revelations in the coming days.

If that happened, he said, an election would be inevitable.