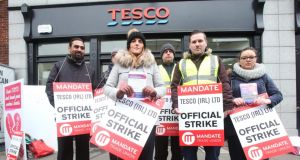 Tesco strike: workers picket outside the firm’s store on Baggot Street. The retailer has said it is “shocked” by Mandate’s reluctance to accept Labour Court recommendations made in November. Photo: RollingNews.ie

Tesco has risked an escalation of the industrial dispute at the company by halting deductions for union subscriptions from the wages of staff at stores where Mandate has placed pickets and failing to respond to a letter from the union seeking fresh talks.

A company spokeswoman confirmed that it had stopped the automatic deductions, describing it as common practice. “We never collect trade union subs in stores on strike. This is a practical decision based on the fact that colleagues have voted not to be in work,” she said

She stressed that it would continue to collect union subscriptions from all other stores.

The move clearly caught Mandate off guard. A spokesman declined to comment as union officials were still “in the process of establishing the full facts in relation to the non-deduction of union subs.” However, he described the development as “a matter of concern”.

It came just hours after Mandate had written to Tesco seeking a fresh round of talks to resolve a dispute which has led to an indefinite strike being called at eight stores with pickets due to be placed on eight more on Friday.

A further 23 stores will ballot for strike action next week in a dispute that centres around a desire on the part of the company to move staff recruited before 1996 onto different contracts.

The proposed contract changes will impact on 250 workers who could see their incomes reduced by up to 15 per cent, according to the union. However the company disputes this and says many of the workers’ wages will increase.

Mandate’s general secretary John Douglas wrote to Andrew Yaxley, chief executive of Tesco Ireland on Wednesday morning with the offer of talks and said it was the second such offer made in less than a week. He claimed an initial approach made to the retailer last Friday met with no response.

“We hope that the company will reconsider our offer in the best interests of Tesco Ireland, its customers and staff,” he said.

In the letter, Mr Douglas said the union had repeatedly sought assurances from Tesco that it would “not attempt to enforce changes to contracts without agreement” and he asked the retailer to “engage with Mandate in good faith discussions in an attempt to find a solution acceptable to both parties for the immediate resolution of this dispute.”

He said Tesco had rejected the offer of discussions and instead demanded Mandate accept a Labour Court recommendation made in November.

Mr Douglas said a resolution of the dispute “cannot be found totally within the confines of the recommendation as it currently stands”.

It is not thought the correspondence will lead to a speedy resolution of the dispute or even talks as Tesco appears steadfast in its insistence that only a full acceptance of the Labour Court recommendations will deliver a solution.

Tesco has said it is “shocked” both by Mandate’s reluctance to accept the court’s recommendations which, Tesco said, was “the cornerstone of the industrial relations system in Ireland” and its suggestion that “customers shop in non-union competitor supermarkets”.

Tesco has described the action as “a retrograde step for the industrial relations processes of the State which it undermines. The Labour Court recommendation is the only solution to this dispute.”