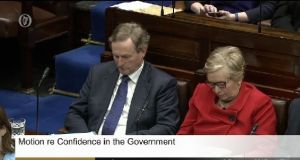 Taoiseach Enda Kenny during a debate on the Government in the Dáil.

The Government has won its motion of confidence in the Dáil by just five votes - 57 to 52, with 44 abstentions - after a series of tense exchanges between Fine Gael, Fianna Fáil and Sinn Féin.

The Government’s confidence motion was in response to a Sinn Féin motion of no confidence in the Coalition following its handling of the alleged smear campaign against Garda whistleblower Sgt Maurice McCabe by senior gardaí.

Taoiseach Enda Kenny sharply attacked Sinn Féin as the Dáil debate on the motion kicked off.

Mr Kenny said that Sinn Féin were not content with collapsing the powersharing arrangements in the North and now wanted to cause similar chaos down here.

“By their actions, Sinn Féin have deprived the people of Northern Ireland of proper political representation at this crucial time in the Brexit process and I am not going to let them do the same in this State,’’ he said.

Meanwhile, Fianna Fáil leader Micheál Martin told the Dáil that “we have no evidence the Government acted in bad faith” in regard to the McCabe controversy and there had been no attempt to block an inquiry into the matter.

“This Dáil has not yet fulfilled its obligation to the people who we are elected to serve,” he said.

However, he warned there was a point after which “there will be no alternative” but an early general election.

Mr Martin said that, “while we have refused to play games”, the Government had breached its confidence and supply agreement with Fianna Fáil.

He criticised mutterings by Fine Gael Ministers who were manoeuvring for a post-Enda Kenny world and saying that “we’ll put manners on Fianna Fáil”.

He said that if the concern of TDs was “genuinely to deal with the scandal”, the question before the Dáil should be about the terms of reference of any inquiry into the controversy and the questions to be answered.

However, instead, he said, “the question is should we collapse the Dáil and have a general election”.

Mr Martin also claimed Sinn Féin was acting in its own political interests.

When Sinn Féin comes across an issue, he said, it looks at ways to exploit it, rather than address it.

He said it was not possible to believe that Sinn Féin was interested in getting at the truth of allegations against Garda whistleblowers.

He said that “every deputy elected to this Dáil has a duty to make this Dáil work”.

Minister for Public Expenditure Paschal Donohoe accused Sinn Féin of trying to destabilise the Government and the country’s progress .

He said nobody in the House had bought Sinn Féin’s new-found interest in An Garda Síochána.

He said An Garda Síochána had suffered at the hands of the party’s “associates’’.

He also said nobody was buying the party’s interest in whistleblowers, given the way the party had treated former senator Máiría Cahill and “the blatant and ongoing denial” of the truth about the handling of cases of sexual abuse within the IRA.

Mr Donohoe also said members of the Anti-Austerity Alliance-People Before Profit, who had advocated that people break the law on water charges, were now purporting to be champions of those who enforced the law.

Minister for Housing Simon Coveney said nobody would be more surprised than Sinn Féin if it won the vote on its motion of no confidence in the Government.

He said: “This is simply yet another negative stunt that comes from a party that offers nothing constructive or positive.”

Fianna Fáil foreign affairs spokesman Darragh O’Brien said it was incumbent on all of them to get to the truth for Mr McCabe.

He said the parties should “never again preside over the absolute sorry saga we have seen in the last week to 10 days, bordering on the pathetic”.

He asked Garda Commissioner Nóirín O’Sullivan “to have a think about her stewardship of the force and if she’s happy with her performance . . . if she’s not, she knows what to do”.

Minister for Social Protection Leo Varadkar said it was not the time for party politics.

He said that “given what has emerged in recent days about the sustained smear campaign against Sgt McCabe, the attempts to destroy his reputation, the torment he and his family have endured, it is clear that his service to the State has not just been distinguished, it has been heroic”.

Mr Varadkar said he had no doubt “that Sgt McCabe was subjected to a scurrilous whispering campaign designed to discredit him. What I do not know, is exactly who was involved and the extent to which it was organised.

“The inquiry must find that out. What is evident is that its aim was not only to intimidate him but also to scare people off from supporting his claims. And, for a time, it was successful.

“We now need to know whether similar campaigns were organised against other gardaí, against public figures and private citizens.

“I believe the Government owes a full and unequivocal apology to Sgt McCabe for the appalling treatment he endured at the hands of gardaí, State agencies and Government departments.”

He said that Fine Gael “is the party of law and order and a party of integrity in public office.

“These are among our core values as a political movement. The events of the past week have undermined belief in us as a party and confidence in the Government. But we can and will put things right.”

He said it was “time to bring an end to a culture where wrong is done but no one is held to account.

“System failures, administrative errors, endless reviews and prevarications, lost records, putting on the green jersey, alleged lack of resources - all these things have been used to justify wrongdoing. No longer.”

Independent Minister of State Finian McGrath stressed the need to get to the truth “in a fair and balanced manner . . . and that’s why the Independent Alliance is staying in Government”.

Mr McGrath said the Independent Alliance had been “dismayed and disturbed” by contradictory accounts of how the Government handled the case.

“This is not how we wish to do business,” he said. “We went into Government in good faith and have today secured a commitment from the Minister for Justice for an international independent audit of An Garda Síochána.”

Sinn Féin leader Gerry Adams said the Taoiseach was leading a Government without purpose and devoid of direction.

The Government, he said, was stumbling from one crisis to the next and had lost any authority to govern.

That authority, he added, had derived from their “guardians’’ in Fianna Fáil.

Mr Adams said the Fianna Fáil position was “we want to ensure that this Government survives’’.

He said that Fine Gael and Fianna Fáil were responsible for “a culture of insiderism, strokes, cronyism, corruption, graft, cute hoorism, brown envelopes, digouts and whatever you’re having yourself’’.

Sinn Féin deputy leader Mary Lou McDonald said the Taoiseach’s defence of himself in the Dáil debate was unconvincing.

She said Enda Kenny presented himself and his Cabinet as “stability” and everyone else “presumably as chaos”.

She said the Taoiseach had presided over chaos in the health system and housing.

Ms McDonald said that it was the trauma inflicted and visited on Mr McCabe “that has rendered you definitively finished as a Government”.

She said she had no confidence in the Government’s ability to oversee the reform of An Garda Síochána.

Labour leader Brendan Howlin said the responsibility of governing is too important to lie with a Government that has neither the authority nor the capacity to govern.

“At a time of great challenge for our nation, we have a Government that is intrinsically weak.”

Confirming his intention to vote against the Government, Mr Howlin told the Taoiseach that he had had no confidence in the Government since its formation.

“After the events of the last week, I cannot in any conscience support you now,” he said.

Mr Howlin said that, rather than the Government discussing the best way of tackling the crisis, “we have seen senior Fine Gael and Fianna Fáil figures stop just short of calling each other liars.

“And more worryingly, we have seen the Taoiseach and one of his senior Ministers do exactly the same.”

Mr Howlin said that “yesterday, the Taoiseach stood in this chamber, and gave two versions of the same event within a 15-minute period.

“And so, after a week of public disquiet, the debate we have this evening has become all about the Taoiseach.”

Mr Howlin criticised how the Government operated and its use of collective Cabinet responsibility.

He said it was not optional for the Cabinet to decided that some issues are decided collectively, while others are not.

“It is the highest law of this land, and is being flagrantly ignored by the current members of our Government.”

Anti-Austerity Alliance-People Before Profit TD Paul Murphy said he had no confidence in the Government for lots of reasons.

He said that these reasons had crystallised this week when there was a glimpse of “the dark, rotten, sinister underbelly of the Irish State, with the black propaganda that has been alleged to come from the top of An Garda Síochána’’.

Mr Murphy said the Government’s response to the controversy was to engage in evasion, spin and outright deception.

Independent TD Michael Healy-Rae said his father had always said that “the person who never made a mistake never made anything”.

However, he asked the Taoiseach: “How could you make so many mistakes in the aftermath of this issue?”

Social Democrats TD Catherine Murphy said there was so much dysfunction across all sectors that the Government could not ask the Dáil to affirm confidence in it.

Green Party leader Eamon Ryan said that, historically, Fine Gael have been too close to An Garda Síochána.

Independents4Change TD Joan Collins said she had no confidence in Fine Gael due to the campaign targeting the TDs who first raised the issue of the illegal quashing by gardaí of penalty points.

She said there had been a campaign to discredit Independent TDs Clare Daly, Mick Wallace and Luke “Ming” Flanagan.

She said she had no confidence in Labour, “who sat on their hands on this for five years” when in Government.