Miriam Lord: Without a whistleblower to call upon, you’re nobody 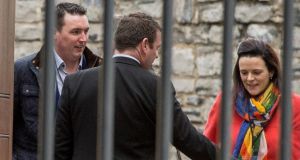 It’s the must-have accessory in Leinster House these days.

You’re nobody if you don’t have a whistleblower to call upon in this time of crisis.

Yesterday, Donegal-based garda Keith Harrison was in Leinster House meeting TDs. The list of TDs and Senators claiming to have had contact with a whistleblower seems to be growing by the day.

Once upon a time it was just a few leftie types flying the flag for officers trying to do their jobs by the book but falling foul of the old-school Garda establishment in the process. Nothing too serious to concern the comfortable body politic.

Now, TDs risk serious injury in the rush to get on the right side of maverick troublemakers, miraculously reclassified as good eggs.

Fianna Fáil’s John McGuinness was one of the earlier converts. He met whistleblower Maurice McCabe on a number of occasions. The former chair of the Public Accounts Committee (PAC) told the Dáil last year that in 2014 he attended a clandestine meeting in a car park at the request of the then Garda commissioner, who allegedly told him not to trust Sgt McCabe. McGuinness claims the meeting happened on January 24th, amazingly, the day after the commissioner, Martin Callinan, appeared before him at the PAC and voiced his disdain for “so-called” whistleblowers.

If McGuinness is telling the truth, and he is happy to give evidence to an inquiry, a body might fall to wondering if his top-ranked confidant shared his misgivings about McCabe with anyone else.

Who, for example, can forget Alan Shatter explaining how Garda discretion works by informing the nation on Prime Time that Mick Wallace was let off with a caution for using a mobile phone when driving? Wallace certainly remembers the episode because he was sitting, gobsmacked, next to the minister for justice at the time.

Shatter got that information from the commissioner. What other nuggets, if any, did he drop the minister’s way and once dropped, did any ripples go out from there?

Apart from McGuinness, most party leaders now have their own accounts of meetings with whistleblowers. In recent times, people listening to Micheál Martin holding forth on the issue could be forgiven for thinking the Fianna Fáil leader keeps the spare room in his house for when Maurice drops by.

And earlier this week, Fine Gael’s John Deasy added his voice to the widening chorus of politicians who have met whistleblowers and raised concerns.

It all reached a crescendo in the Dáil on Tuesday when the Taoiseach was repeatedly pressed to clarify what he knew about a smear campaign allegedly run by top- ranking Garda officers against Sgt McCabe, and when he first became aware of it.

Enda Kenny’s faltering and contradictory responses were greeted with dismay by his party colleagues and mercilessly attacked by the Opposition.

And where once his penchant for embellishing stories for dramatic effect was seen as an endearing foible, his account of an imaginary exchange he had with the Minister for Children was condemned as a fib too far.

With Frances Fitzgerald, the Minister for Justice, getting an equally torrid time, they endured a grilling which went on for nearly three hours. By the time it ended, as is the way in Leinster House, the talk was not of justice for whistleblowers. Instead, it was all about the beginning of the end for long-time Fine Gael leader Kenny.

If Tuesday was a bad day at the office for the Taoiseach, yesterday wasn’t much better.

At Leaders’ Questions, Micheál Martin resumed where his colleagues left off the previous night. He now suspected the Taoiseach misled him during a phone conversation by not revealing the full extent of his knowledge about false allegations of a sexual nature against Sgt McCabe.

Then the Sinn Féin leader piled in with more questions.

In the middle of it all was Enda Kenny, absently twiddling part of the black plastic headset from the chamber’s audio system, looking like he was afraid to put it anywhere near his head in case a blast of rogue whistles burst an eardrum.

He looked tired and thoroughly fed up; a picture repeated on the Fine Gael faces in the rows behind him. Three backbenchers – Jim Daly, Pat Deering and Fergus O’Dowd – sat in the back row, whispering to each other from behind their hands. Martin Heydon, the chair of the parliamentary party, was staring into the distance, like he had seen a ghost.

All the while, the argument about who knew what and who said what and when raged on, with little light from the Taoiseach. His Government colleagues from the Independent Alliance were not in the chamber, looking into their souls and agonising on how best to make themselves relevant in the midst of this crisis.

Did Enda notice the change in atmosphere during Gerry Adams’s contribution? Did he notice the little frisson among TDs and on the press gallery?

It was 12.20pm when Leo Varadkar sauntered in, looking like he hadn’t a care in the world, taking his seat across the aisle from leadership rival, Simon Coveney. He wore the smile of a man who knows he is the centre of attention, and likes it.

Perhaps he was thinking about the reports of panic among the backbenchers on Tuesday in the wake of their leader’s weak Dáil performance, reminding them of their own political mortality if they don’t replace him in plenty of time before the next election.

Apparently such was the sense of gathering unease, Leo and Simon had to “calm” the jittery troops. How did they do that? Fan them with towels? Hit them a box? Throw buckets of water over the most hysterical?

That little vignette from Tuesday’s fright night won’t have been lost on Enda. He remains in his job now on sufferance.

The result of last night’s confidence vote in his Government was a foregone conclusion. But it was a hollow victory for the Taoiseach.

The rapidly approaching end of Enda’s leadership looks like another foregone conclusion now.

He must know it is almost time to hand on the baton. At an engagement yesterday morning, photographers managed to get a photo of him with part of a word on a sign above his head. It said “help”.

In the afternoon, at another engagement, they spotted another sign and isolated the word “fire” above his head. It’s what happens when a leader is on the way out.

It’s the little things that trip you up, noted Albert Reynolds before he departed.

For Enda, will it be a fib too far?