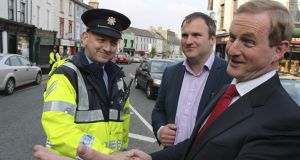 To those who know him, Enda Kenny’s demeanour over the past week has been recognisable but not familiar.

He looked tired and low, at times seeming as if he had the life taken out of him.

The last time people had seen that, the Taoiseach was in the aftermath of the last general election, the anniversary of which is only days away.

Kenny, according to his friends, took the loss hard and felt for those Fine Gael deputies who had lost their seats. His humour only lifted when it became clear that he was bringing his party back into Government, facilitated by Fianna Fáil.

“I have never seen Enda so low,” said one source, while another remarks that his ability to “manage chaos” seemed diminished. Observers wondered who was now around Kenny – as Phil Hogan and others had been – to politically watch his back.

His admission in the Dáil this week that he had not in fact had a conversation he claimed he had had with Minister for Children Katherine Zappone over the Garda Sgt Maurice McCabe affair spoke of a man who was tired.

Yesterday, he delivered what was billed as a keynote speech on the Government’s Brexit strategy in the Mansion House, yet his performance seemed flat.

He went from there to a meeting with the Independent Alliance, where Shane Ross, Finian McGrath and Kevin “Boxer” Moran gave Kenny and extremely difficult time over his recent performance.

From there, to a meeting of the Fine Gael parliamentary party. His TDs took fright at how close they believed they came to a general election in recent days and largely resolved that Kenny’s leadership must be dealt with.

Ministers and deputies normally loyal to Kenny knew it was time for him to go.

He had said he would not lead them to the polls once more, and the party now wanted that change to happen.

As yesterday wore on, the mood in Leinster House suggested a move would come next week. Nobody anticipated Wednesday night’s parliamentary party meeting, or that a confidence motion in the Government would be the impetus for it. Nobody, said a Cabinet Minister, wanted a move against Kenny this week.

But it was obvious patience was wearing thin with the Taoiseach. Simon Coveney and Leo Varadkar had urged calm among backbenchers who were seeking a rapid removal him. Yet still TDs urged both men to act, with some privately saying the party could not wait.

Both had believed Kenny would eventually step aside of his own accord and should be given the space to do so. Despite the signals that neither Varadkar nor Coveney would ask Kenny to stand aside, denizens of Government Buildings became nervous.

Something changed on Wednesday, and it is understood Varadkar, in particular, concluded that Kenny would not go on his own steam.

Consequently, action would have to be taken.

At the outset of the parliamentary party meeting, Kenny addressed his TDs and senators and spoke of how difficult the past week had been.

He said the past week has “not been easy”, as the Government grappled with fallout from the Garda controversy.

The Taoiseach is understood to have asked TDs to focus on the motion of confidence in the Government being being debated in the Dáil, and said the decision to establish a tribunal was the correct approach to deal with the McCabe affair.

Martin Hedyon, chairman of the Fine Gael parliamentary party, followed by telling the gathering: “United we stand, divided we fall.”

He also said he wanted to get “down to the chamber”, understood to be a reference to the Dáil motion.

Minister for Finance Michael Noonan the listed the economic achievements of the Government, saying “how successful we have been with the economy and [how] practically every objective we have set has been achieved”, according to a source.

Dublin Fingal TD Alan Farrell also said he wanted to get down to the Dáil chamber to defend the Government.

The rhythm became familiar. TDs had heard this tune before – the party hierarchy was circling the wagons.

One of those present at the meeting described the opening exchanges as an “anti-climax”.

Then Varadkar, one of the front-runners tipped to succeed Mr Kenny, took to his feet. He called Sgt McCabe a hero and told TDs that the party needed to be ready for an election, given how close it had come over the past week.

The statement was laced with meaning, given what Kenny had said about not leading the party into another election and the man who was doing the talking.

To emphasise the point, Varadkar said there should be an early meeting of the parliamentary party next week to discuss what to do. He was effectively giving Kenny a time frame of a couple of days to give an indication of when he will stand down.

It was clear what was happening.

Kenny’s days as leader of Fine Gael were coming to an end, in a blunt fashion.

Others spoke. Simon Harris also said the party needed to prepare for an election, as did Seán Kyne. Paschal Donohoe issued a rallying call, telling TDs they could win the next election.

Kenny asked that internal Fine Gael discussion be postponed until the Government dealt with its confidence motion.

From the Fine Gael party rooms he went, looking punch drunk, to the Dáil chamber to speak for his government and the party he has led for over 14 years.

But not for much no longer.