Garda audit to be led by independent appointee 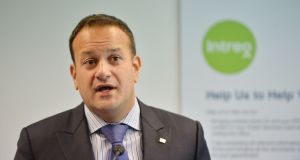 Minister for Social Protection Leo Varadkar: “I call on individual gardaí who spread rumours, passed to them by superiors, believing them to be true, to come forward . . .” Photograph: Alan Betson

An independent person is to be appointed to conduct an overview of An Garda Síochána in a compromise offered to the Independent Alliance to ensure its continued support of the Government. The grouping, which includes Minister for Transport Shane Ross and two Ministers of State, strongly criticised colleagues for failing to grasp the ongoing controversy around Garda whistleblowers.

Mr Ross said it considered withdrawing from their agreement with Fine Gael over the contradictions in accounts between Taoiseach Enda Kenny and Minister for Children Katherine Zappone.

However, the Minister said this was bigger than one individual though declined to express confidence in Mr Kenny.

The group secured an agreement to have an international expert on policing from outside the jurisdiction to carry out the nine-month audit of the Garda force.

There are already three oversight bodies for An Garda Síochána – the Garda Síochána Ombudsman Commission (GSoc), set up in 2007 to deal with complaints about the conduct of gardaí; the Policing Authority, to monitor the performance of the policing services; and the Garda Inspectorate, which carries out inspections in relation to aspects of the operation and administration of the Garda Síochána.

The new audit will run in parallel with a tribunal of inquiry, which will be established, into the alleged smear campaign against Garda Sgt Maurice McCabe.

The scope of the investigation has yet to be determined but Tánaiste Frances Fitzgerald met Opposition spokespeople on justice yesterday to consider terms of reference.

The Tusla link to the alleged smear campaign, the role of the Health Service Executive, and the contact between Ministers and former and current senior gardaí are to be part of the inquiry.

It is understood the Government is willing to expand the inquiry to examine other whistleblowers. However, it is adamant the case of Sgt McCabe must be the priority. The chair of the tribunal may be asked to report in modular form with Sgt McCabe’s case to be prioritised.

A motion is to be tabled in the Dáil on Thursday to establish the inquiry, and the terms of reference are to be outlined at that point.

Taoiseach Enda Kenny also offered a full apology to Sgt McCabe for the treatment inflicted on him by State agencies.

Mr Kenny said Sgt McCabe had suffered poor treatment by a number of State agencies and he was sorry for him and his family.

“He and his family deserve the truth, as do all against whom allegations have been made,” said Mr Kenny.

Minister for Social Protection Leo Varadkar said the Government had acted poorly over the past week with regard to the revelations surrounding Sgt McCabe. He had been subjected to a scurrilous whispering campaign designed to discredit him and Fine Gael would put that right, Mr Varadkar said.

The senior Fine Gael Minister said he did not know who was involved or the extent of the attempts. That was the job of the inquiry, he added.

Mr Varadkar said: “I call on all those with information to come forward. In particular, I call on individual gardaí who spread rumours, passed to them by superiors, believing them to be true, to come forward and offer to give evidence to the public inquiry. You too were deceived and are not to blame.”