Once considered the likely successor to his father Kim Jong-il as leader of North Korea, Kim Jong-nam, the half-brother to Kim Jong-un, has reportedly been assassinated with poison needles in Kuala Lumpur, Malaysia. Video: Reuters 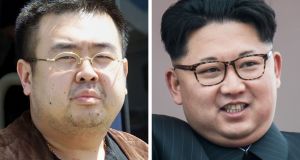 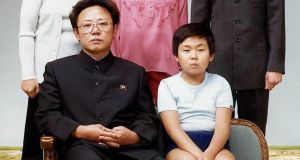 Malaysian police have arrested a Vietnamese woman suspected of involvement in the assassination of the estranged half-brother of North Korean leader Kim Jong-un.

However, North Korean government officials in Malaysia have objected to an autopsy being performed on the body of Kim Jong-nam, Malaysian government sources said on Wednesday.

The officials requested that the body be released to them right away, but Malaysia rejected the request, several sources said.

No decision has been taken on whether the body of Kim Jong-nam will be handed over to North Korea, the sources added.

Earlier, South Korea’s top spy, Lee Byung-ho, told parliamentarians in Seoul that the North Koreans had been trying for five years to assassinate Mr Kim, who had been under the protection of the Chinese government.

The assassins are thought to have used poisoned needles, a chemical spray or a cloth laced with poison to kill the 46-year-old, who died on the way to Putrajaya Hospital after the attack.

The suspect was “positively identified from the CCTV footage at the airport. Police are looking for a few others, all foreigners,” the police said in a statement.

Mr Kim was due to travel back to Macau, where he is said to have been living for several years, on a 10am flight from the budget airline terminal at the airport.

Malaysia has relatively close relations with North Korea, and citizens of each country do not need a visa to visit.

CCTV footage from the airport shows Mr Kim having an “interaction with two Asian women”.

The assailants are believed to have fled the scene in a taxi immediately after the attack. Police have also detained the taxi driver.

The assassination looks like it is aimed at strengthening Kim Jong-un’s grip on power by removing a potential rival, although Mr Lee said the action was presumably based on Kim Jong-un’s “delusional disorder,” rather than on any calculation that his half brother is a threat to the regime.

Kim Jong-nam and Kim Jong-un are both sons of former North Korean leader Kim Jong-il, who died in late 2011, but they had different mothers.

Kim Jong-nam is the elder of the two and he did not attend his father’s funeral.

His mother was an actor named Song Hye-rim, and his father kept his parents’ relationship secret.

He has been critical of the dynastic communist state and was said to have been close to his Jang Song-thaek, who was North Korea’s second most powerful man before being executed on Kim Jong-un’s orders in 2013.

Malaysian police said the dead man was using a passport under the name Kim Chol.

Mr Kim had a history of using forged travel documents - in 2001, he was caught trying to enter Japan using a false Dominican Republic passport.

He said he was planning to visit Disneyland in Tokyo, and the incident embarrassed his father and reportedly ended his chances of succeeding Kim Jong-il.

Over the years, North Korea has carried out a string of assassinations, kidnappings and assaults overseas using its agents.

In 1968, a team of 31 commandos attacked the Blue House, the residence of South Korea’s president, in a failed attempt to assassinate president Park Chung-hee.

In 1983 they blew up a monument in Rangon in Myanmar shortly before the South Korean president Chun Doo-hwan was due to lay a wreath.

Film director Shin Sang-ok and his actor wife Choi Eun-hee were both snatched off the street in Hong Kong in 1978 and taken to North Korea, where they were held separately for five years and forced to produce films.

“Kim Jong-un may have removed a thorn in his side by assassinating Kim Jong-nam, but it seems that he would not be able to avoid more isolation down the road,” Cheong Seong-chang, a senior researcher at the Sejong Institute, told the Yonhap news agency.