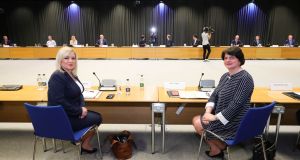 The Chinese consulate in Belfast has removed a controversial claim on its website that the Northern Ireland Executive “understands and respects” new security legislation in Hong Kong.

Both the North’s First and Deputy First Minister rejected the alleged endorsement on Tuesday, with Arlene Foster tweeting that it “misrepresents” what was said at a meeting the two ministers held with the Chinese consul general.

“My position on Hong Kong is the same as that of HMG [her majesty’s government],” Ms Foster tweeted. “I will be writing to [the Chinese consul general] Madame Zhang to underscore my disappointment.”

Deputy First Minister Michelle O’Neill tweeted that she had “made it very clear that I supported the ‘One Country, Two Systems’ international agreement” for Hong Kong.

There has been widespread international criticism of the new law in Hong Kong imposed by China in June, which gives Beijing additional powers to clamp down on and punish pro-democracy protesters in the city.

The UK foreign secretary, Dominic Raab, described the law as “a flagrant assault on freedom of speech and freedom of peaceful protest for the people of Hong Kong”.

The Irish News published on Tuesday a translation of a report on the Chinese consulate’s website of a video call which took place between the consul general and the First Minister and the Deputy First Minister last month.

The report claimed that, during the call, Ms Foster and Ms O’Neill had thanked China for its support during the coronavirus pandemic and that they stated that the “Northern Ireland government cherishes friendship with China [and] understands and respects Hong Kong’s national security legislation”.

However, by Tuesday evening, this section had been removed, and the website stated only that “Foster and O’Neill expressed that Northern Ireland is willing to further strengthen mutually beneficial co-operation with China in epidemic prevention and control, local co-operation, economic, trade, and tourism, so as to better benefit the people of both sides”.

Earlier on Tuesday a spokeswoman for the Executive Office said that during the call the Chinese consul general had read a Chinese government statement on Hong Kong.

The Chinese consulate’s report, she said, “does not reflect [the] ministers’ positions on Hong Kong security legislation, nor their comments at a recent courtesy meeting with the Chinese consul general.

“As these matters are not devolved, [the] ministers [during the meeting] stated their awareness of the issues and their hope that the matter could be resolved.”

Amnesty International’s Northern Ireland programme director, Patrick Corrigan, called on the Northern Executive to publish its minutes of the meeting.

“We need to hear a clear public condemnation from Arlene Foster and Michelle O’Neill of what the Chinese government is doing in Hong Kong and Xinjiang, ” he said.

“If the First and Deputy First Minister did challenge these human rights abuses, given the official Chinese report, we now need clear evidence of that.” Additional reporting – PA.