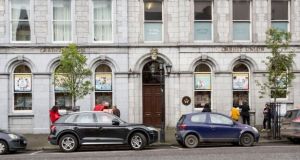 Community leaders in Charleville have expressed hope that a functioning credit union will be operational in the town next week after members of Mallow Credit Union voted in favour of extending their operation into the neighbouring North Cork town.

The move by Mallow Credit Union follows a series of negotiations to fill the void left in Charleville after the decision last month by the Central Bank to appoint provisional liquidators to Charleville Credit Union which has some 12,000 members.

“The liquidator is provisional until next Monday, November 13th so from then on provided the Central Bank which is the regulator for credit unions is okay with everything, I can’t see why Mallow can’t be in there and up and running from this day week,” he added.

“Having had the successful experience of merging with three other like-minded credit unions in 2016, Mallow now operates a seven-branch network across our enlarged community, where in excess of 30,000 active members avail of our services,” said Mallow Credit Union in its statement.

Mallow Credit Union Chairman David Browne told members at a special meeting at Springfort Hall last Friday that as soon as the Central Bank formally approves the extension of Mallow’s common bond, it will open its newest branch in Charleville without delay.

Charleville Credit Union was not insolvent with savings of €40 million but problems dating back to 2009 when it gave out loans during the property bubble resulting in €15 million in toxic loans meant its reserves fell short of the level required by the Central Bank.