Irish Rail warn CIÉ of the risk of a five-day strike which would cost it €1.5 million 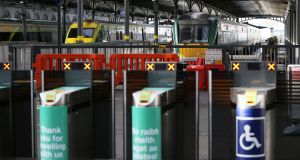 Trains sit idle on the platforms at Heuston Station, Dublin, during a second one-day strike by Irish Rail train drivers over pay and conditions. Photograph: PA

Irish Rail management warned its parent company as early as September that it could face a five-day strike that would cost it €1.5 million in lost passenger revenue.

Tens of thousands of rail passengers again face disruption on Tuesday as staff at the State-owned transport company stage a second 24-hour strike as part of a campaign for a pay increase. No Dart, commuter or intercity services will operate during the strike.

Three further all-day stoppages are scheduled to take place in the weeks ahead with potentially more to follow in the run-up to Christmas.

The forecast of a €1.5 million loss is recorded in the confidential risk and opportunities register of the CIÉ holding group and the warning was made at a time when talks on a pay claim by trade unions were still under way and a ballot on strike action had not commenced.

A spokesman for Irish Rail said the figures the company provided to the CIÉ group represented an indicative estimate of the scale of a potential dispute and its cost.

It is understood the €1.5 million cost cited in the document does not include financial penalties that are applied by the National Transport Authority in the event of the rail operator not providing services due to industrial action.

Separately, the chief executive of Irish Rail has expressed concern that a prolonged dispute on the State’s railway was becoming a possibility. In a message to staff yesterday, David Franks urged trade unions to go to the Labour Court over their pay claim.

“Despite our financial predicament, we want to be in a position to deliver an improvement in earnings to you,” he said. “We do not want you to suffer further losses and to see your job security threatened through insolvency.”

He added that “we should all be most concerned that a prolonged dispute – with the resulting damage to our customers, our business and your income – is becoming possible”.

Minister for Transport Shane Ross appealed to the company and trade unions “to engage realistically and constructively” in talks.

“It is vital for the travelling public – and also for the staff and for the company itself – that public transport is sustained, and that the dispute is resolved in a realistic, fair and workable manner.”

Staff at the company are seeking a pay rise of 3.75 per cent without the provision of additional productivity. The company has offered a 1.75 per cent increase for one year, to be facilitated by measures including performance and absenteeism management, and revisions to redeployment policy and payroll.

Siptu said the Irish Rail stoppage was “regrettable but inevitable due to management inaction”.