Podcast: ‘It’s become the norm if you’re above a certain income level’ 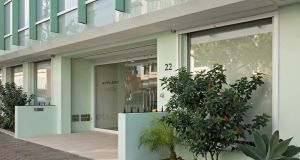 The offices of Appleby, an offshore law firm, in Hamilton, Bermuda. The core of the Paradise Papers leak, totaling more than 13.4 million documents, focuses on Appleby, a 119-year old company that has helped obscure the wealth of multinational companies and the superrich. Photograph: Meredith Andrews/The New York Times

The leaked documents show how deeply the offshore financial system is entangled with the overlapping worlds of political players, private wealth and corporate giants, including Apple, Nike, Uber and other global companies that avoid taxes through increasingly imaginative bookkeeping maneuvers.

Irish Times Legal Affairs Correspondent Colm Keena has been working on the project, and on this podcast he talks to Hugh Linehan about what has been uncovered, including the investments made by famous and powerful figures such as Bono and Queen Elizabeth, and the legal advice received by AIB when The Revenue Commissioners requested information about offshore deposits.