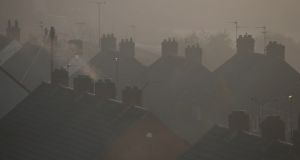 Air pollution: the EPA is concerned about particulate matter, which largely comes from the burning of solid fuel. Photograph: Matt Cardy/Getty

Poor air quality is directly linked to about 1,500 premature deaths in Ireland each year as excessive pollution causes the State to fall foul of global standards, a new report from the Environmental Protection Agency has said.

The burning of solid fuels, including wood, coal and peat, poses the biggest threat to air quality in the Republic, with pollution at locations across the State regularly breaching World Health Organisation guidelines.

Although Irish air quality continues to meet the standards set by the European Union, only stricter guidelines will reduce the risk to human health, according to the report, published on Monday morning.

The EPA expressed concern about particulate matter, which largely comes from the burning of solid fuel, and said the problems it identified were most acute in rural areas, “especially during the winter months, when people’s fuel choices can directly impact on our air quality and on our health”. Particulate matter is responsible for most of the premature deaths, it said, by damaging people’s hearts and lungs.

The agency said the second-biggest cause of pollutants were cars, particularly in urban areas, where nitrogen dioxide is likely to continue to climb and put more people’s lives at risk “unless we reduce our dependence on the private motor car”.

The EPA has announced plans to develop a national ambient-air-quality monitoring programme. The programme’s 38 new automatic monitoring stations will help provide locals with information about current air quality, forecast future air quality. and feed into policymaking. The agency also hopes to raise public awareness of and involvement in air-quality issues.

“It has become increasingly clear that there are no safe levels of pollutants,” the director general of the EPA, Laura Burke, said, “and with this in mind it is time to tackle the biggest issue impacting on air quality in Ireland: emissions from solid fuels in our small towns.”

She said that although the EU has introduced a range of legal instruments to improve air quality, the standards were “still not in line with the tighter WHO air-quality guidelines”, and she called for movement towards these, “especially for particulates and ozone, as legal and enforceable standards across Europe and in Ireland”.