Change afoot for Ireland as EU looks to post-Brexit era

An Taoiseach Leo Varadkar says that he is "confident" that the solidarity displayed towards Ireland by outgoing EU Commission president Jean-Claude Juncker with regard to Brexit will continue under Ursula von der Leyen. Video: EU Council 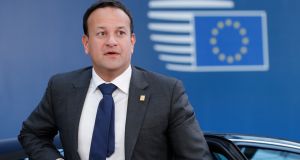 The extraordinary impasse at the European Council over who fills the top jobs in Brussels for the next five years was finally overcome last night as European Union leaders agreed on a compromise slate of appointments, which will go before the European Parliament this morning.

The unprecedented stalemate – and the manner of its resolution – demonstrates how things are changing for Ireland as the EU looks to the post-Brexit era.

Cutting deals and making compromises is the culture of politics and that often takes time. Still, three days – after weeks of private disagreement between European leaders over the jobs package – was probably laying it on a bit thick.

The indecision of recent days demonstrates the shifting sands of power on the European Council – the group of presidents and prime ministers that is the most powerful decision-making body of the EU – and the politics that surrounds it.

It featured an astonishing rebellion in the EU’s largest and most powerful political grouping, the European People’s Party (EPP) against its most powerful figure, German chancellor Angela Merkel.

Returning home from the G20 meeting at Osaka in Japan on Sunday, Merkel presented her compromise plan to EPP colleagues on Sunday night, which ceded the presidency of the European Commission to Frans Timmermans, the Dutch socialist.

Rather than praise her for finding a way through the intractable disputes of recent weeks, the EPP instead rebelled against Merkel’s proposed deal, fatally damaging it.

The rebels were mostly made up of Poland and other central and eastern European countries angered at Timmermans’s enforcement actions against them as European Commissioner. But they also included, to the surprise of many, Taoiseach Leo Varadkar, one of the firmest holdouts against Merkel’s proposals.

“It’s fair to say there’s a lot opposition to the proposal that was made in Osaka from the EPP’s point of view,” Varadkar said on Sunday night. “The vast majority of the EPP prime ministers don’t believe that we should give up the presidency of the commission quite so easily, without a fight.”

Varadkar’s aides stress he had no objection to Timmermans personally. But he was determined to hold the EPP’s line that their candidate, Manfred Weber, was entitled to the presidency of the commission under the spitzenkandidaten system, which favours the “winner” of the European elections for the commission role.

But in truth, Weber’s candidacy has been hopeless for weeks, and everyone knew it. So Varadkar’s break with Merkel was as much about building EPP alliances as it was about backing Weber for a cause he must have known was lost.

It was also, insiders speculate, part of a bid to support the chief Brexit negotiator – and conspicuous ally of Ireland – Michel Barnier for the commission job. For weeks, senior Irish sources have harboured the expectation that if and when Weber’s candidacy faltered, Dublin would be delighted to back Barnier. “Leo was nearly acting as his election agent,” said one Irish source in Brussels.

But the Frenchman’s candidacy never took off. Instead, the name of the German defence minister Ursula von der Leyen suddenly appeared. With the advantage of political affiliation, nationality and gender, exhausted leaders agreed to her and the rest of the package. Merkel was reportedly the last to agree.

The chancellor leaves the council significantly diminished. But it is clear, too, that Macron has not replaced her – not yet, anyway – as the dominant presence on the body, its dealmaker. Instead ad hoc alliances, often between smaller countries, are becoming more important. Size still matters, of course. But so does being nimble.