Irish Water says no incidents have occurred over last 48 hours 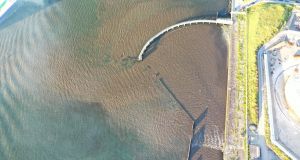 The Environmental Protection Agency (EPA) has confirmed it has sent a team of inspectors to the Ringsend wastewater treatment plant in Dublin to assess recent discharges into Dublin Bay from the facility.

It comes as images taken from a drone emerged showing discolouration of the water at a discharge point at Poolbeg.

Irish Water informed the EPA on Tuesday about a brown-coloured plume seen discharging from the plant. The utility reported no unusual occurrence or breakdown at the plant over the past 48 hours, and it is currently investigating the cause.

The EPA inspectors will investigate circumstances at the plant and take samples of the discharge, an EPA spokeswoman added. It is the latest in a series of incidents at the plant which is operating above capacity, with problems exacerbated during periods of high rainfall.

The EPA has repeatedly said that the Ringsend facility was failing to meet national and EU treatment standards. “It is failing to meet these standards and failing to comply with the requirements of its waste water discharge licence because the plant is not big enough to adequately treat all of the waste water that it receives,” the EPA spokeswoman said.

“Waste water discharged back into the environment from this overloaded plant is breaching, and will continue to breach, the quality standards until upgrade works are complete.”

The EPA is continuing to liaise with Irish Water in relation to recent incidents at the plant, notably a previous discharge of large volumes of partially-treated sewage in February. Though there was a delay in notifying the agency, it has yet to determine if enforcement action will be brought against Irish Water.

The EPA said, “it is likely the problems with the discharge will continue at this overloaded treatment plant until the upgrade works are completed, between 2020 (phase 1) and 2023 (phase 2). This means that there may be a discoloured plume visible from time to time until the plant is upgraded”.

In a statement on Tuesday, Irish Water said the plant was operating normally and said “no incidents” had occurred in the last 48 hours .

It said the wastewater at the plant was being “treated to the best possible standards currently achievable at the plant.”

“Factors such as low tidal levels, temperature of the receiving waters, the volume of wastewater discharged and wind strength and direction can increase the visibility of the treated effluent at the discharge point,” it added.

It said this would happen “on occasion” until upgrade works take place at the plant which it says is currently overloaded.

“Currently the Ringsend wastewater treatment plant treats approximately 40 per cent of the country’s wastewater load. In order to treat the increasing volumes of wastewater arriving at the plant to the required standard Irish Water is investing over €400 million in the staged upgrading of Ringsend.”

Temporary swimming bans were put in place at Seapoint, the Forty Foot in Dún Laoghaire and Sandycove beaches last week after partially treated waste water was released into Dublin Bay by the Ringsend plant. The discharge followed heavy rainfall.

“Given that it will 2023 before the planned expansion to the plant will be completed, it is reasonable to estimate that there will be more swimming bans for the foreseeable future,” he said, calling for a “practical and effective way” to communicate with Dublin Bay users.