Boris Johnson and Jeremy Hunt were in Belfast for the latest Tory leadership hustings. 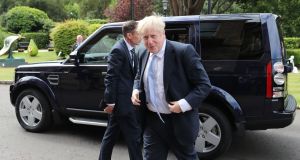 The Brexit withdrawal agreement as it currently stands is “a dead letter”, according to Boris Johnson, the front-runner to be the next British prime minister.

Mr Johnson and foreign secretary Jeremy Hunt, his rival to replace Theresa May as leader of the Conservative Party, were speaking at the five-star Culloden Hotel in Holywood, Co Down, on Tuesday.

Speaking in front of around 200 of the Conservative Party’s 500 members in Northern Ireland, Mr Johnson said the backstop presents “an impossible choice” which he found “unacceptable”.

He said the “union (of Britain and Northern Ireland) comes first” and that “we can get solutions” to the issues that exist with the agreement and backstop.

“The Withdrawal Agreement as it currently stands is a dead letter,” he said. “Under no circumstances, whatever happens, will I allow the EU or anyone else to create any kind of division down the Irish Sea or attenuate our Union.

“That is why I resigned over Chequers. It is a terrible moral blackmail it puts on the UK government. We can’t have that.”

Mr Hunt also said the backstop “has to change or it has to go”.

Both candidates ruled out holding a snap Northern Ireland only referendum on the backstop, with Mr Johnson saying “the only thing that will snap would be people’s patience. We have had a referendum. Let’s get on”.

Both men talked up their unionist credentials; attacked Labour Party leader Jeremy Corbyn; pledged to invest more personal time in trying to solve the impasse that has halted powersharing at Stormont; and pledged to rebuild the Conservative Party in Northern Ireland and Britain.

Mr Johnson said the Conservative Party, which has no elected political representatives in the North, “need to get our mojo back” and that he was the best candidate to do this.

Both men acknowledged the importance of the Tory relationship with the DUP, which is supporting the UK government in a confidence and supply deal. However, Mr Hunt said his preference would be for Conservative MPs to be elected in Northern Ireland.

Neither candidate was fully drawn on the absence of same sex marriage and the lack of abortion rights for British and Irish citizens in the North.

They said these were matters for a devolved administration at Stormont, which has not sat since January 2017 after the DUP and Sinn Féin’s relationship broke down.

“I will put in the time personally to get the Assembly back up and running,” Mr Hunt said.

‘Back Boris’ and ‘Has to be Hunt’ supporters were in the room, along with many undecided voters.

Frank Shivers, from North Down, said Conservatives needed “a charismatic leader” and that after Theresa May being “a safe pair of hands being treated badly by the EU and certain sections of her party, I don’t think Boris will be so much of a walkover”.

Christine Donnelly, from Newtownards, said she was backing Mr Hunt because she thinks he will be “a better leader”.

“I think he is a stronger candidate,” she said.

Her son Andrew (17) said he wants Mr Hunt to be prime minister because he would be better able to “attract swing voters in a general election”.

“There is all the controversy with Boris, but with Jeremy he is a diplomat and comes across better to the public,” he said.

Margaret McVeigh from Belfast said she was “more Hunt than Boris”.

“He is a very sensible, serious, careful person with experience in the foreign office that is pretty important when it comes to Brexit,” she said. “He’s go the demeanour of somebody who could be prime minister.”

Gary Hynds, NI Conservative Party deputy chairman, said he was undecided about how to cast his vote but predicted the outcome would “be closer than people think”.

Ms Foster said the talks on Stormont and “delivering the EU referendum result” had been useful.