Call for 1% cap on ‘unsustainable’ rent increases for three years 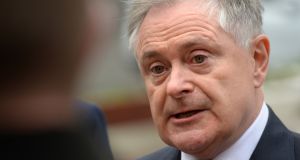 Labour leader Brendan Howlin said efforts to tackle rent inflation are not working because the creation of Rent Pressure Zones had given landlords a signal to increase their prices by 4 per cent a year, which was pushing people out of properties. File photograph: Dara Mac Donaill/The Irish Times.

The maximum a landlord can increase rent by should be capped at 1 per cent for three years to bring housing inflation in line with EU monetary policy and prevent further homelessness, the Dáil has heard.

Labour leader Brendan Howlin said efforts to tackle rent inflation are not working because the creation of rent pressure zones had given landlords a signal to increase their prices by 4 per cent a year, which was pushing people out of properties.

He made the call as 19 more locations were added to the list of rent pressure zones, introduced to cap rent increases in areas of high housing demand.

Mr Howlin said the 4 per cent maximum annual increase “is far too high” when wages were increasing at less than half that rate. He also pointed to the European Central Bank’s (ECB) decision to set a 2 per cent non-optional ceiling for inflation.

“The Government is giving landlords twice the rate that the ECB considers appropriate,” he added.

The Wexford TD said EU monetary policy was binding for eurozone countries and he asked “how can the Government justify 4 per cent annual inflation for controlled rents”.

He said it was “clearly unsustainable” and landlords outside rent pressure zones were increasing their rates by even more because they see the 4 per cent rate as a “low benchmark”.

However, he said the largest expansion of rent pressure zones was coming with 19 new locations added, along with changes in options for short-term lettings. He said they would have a positive impact on the rental sector but “we need time now for that to bed down”.

During Leaders’ Questions, Mr Howlin said thousands of people were being pushed out of the rental sector and into homelessness because of this policy as earnings for full-time workers increased by just 1.7 per cent between 2016 and 2017 while the national minimum wage had grown by less than 1.5 per cent since 2011.

He called for the Government to either “raise wages to meet this notional 4 per cent target or set rents properly at just 1 per cent for three years to allow people to be able to catch up with rent increases and to be able to afford to stay in their own homes”.

Former Sinn Féin leader Gerry Adams also called for a rent freeze and said that in his Louth constituency, which has been declared a rent pressure zone, the average rental cost is €1,206, an increase of 7.6 per cent since last year and an increase of 44 per cent since the Government took office.

Replying for the Government, Minister for Communications Richard Bruton said the addition of 19 new areas including Athlone, Dundalk, Trim, Waterford, Limerick, Gorey and Arklow provided protection for people in those areas.

These zones “have helped to contain the growth of rents”, he said.