Boris Johnson an ‘enthusiast’ on building of NI to Scotland bridge

Tory leadership candidate says finance for such a project ‘not the issue, the issue is political will’ 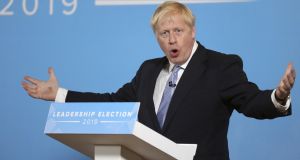 British Conservative leadership contender Boris Johnson says he is an “enthusiast” for the idea of a bridge between Northern Ireland and Scotland. Photograph: Peter Morrison/Getty Images.

British Conservative leadership contender Boris Johnson says he is an “enthusiast” for the idea of a bridge between Northern Ireland and Scotland.

The road connection between the two regions has been promoted by the DUP.

Mr Johnson was asked twice about the idea by Conservative Party members in Northern Ireland while appearing at a hustings event on Tuesday.

“I am an enthusiast for that idea, I’m going to put it out there, I think it’s a good idea but again that is the kind of project that should be pursued by a dynamic Northern Ireland government championed by local people with local consent and interest, backed by local business and mobilised by the politicians in Northern Ireland,” he said.

“That’s what should happen. I’m all in favour of it but it’s got to be supported by people here in Northern Ireland.

DUP leader Arlene Foster and MP Sammy Wilson have both expressed their support for the building of a bridge to Scotland. Scottish first minister Nicola Sturgeon did not rule it out earlier this year.

But speaking during a visit to Dublin in May, Ms Sturgeon said she believed there are other ways of strengthening relations between Scotland, Northern Ireland and the Republic of Ireland.

“We will always talk about how we can strengthen relations, we need to have practical and achievable ideas,” she said.

“I have representations made to me about the idea of a bridge, there are obviously a lot of challenges and things to be discussed there.

“Whether it’s around a bridge or in other ways strengthening the relationship between Scotland, the north of Ireland and the Republic of Ireland is a big priority for my government.”

Last year, architect Prof Alan Dunlop proposed two options for the bridge which could connect either Larne and Portpatrick or Mull of Kintyre with Torr Head, and estimated the cost to be between £15 billion and £20 billion. - PA

Coronavirus: People to be allowed to travel anywhere in their county from Monday as Ireland moves to exit lockdown 12:47
Make face masks compulsory in shops, public transport - Immunology expert 12:29
Twitter ordered to reveal who is behind parody Fastway Couriers account 12:21
Eight dogs worth €5,000 seized by gardaí in Co Tipperary 12:06
HSE says contacts of confirmed cases four times more likely to get Covid-19 11:39