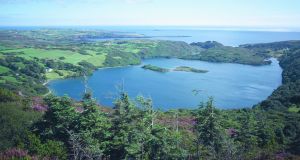 Lough Hyne, near Skibbereen, Co Cork, is one of the Natura sites which could be impacted by discharges from the proposed plastics plant, according to SOS chairman Brendan McCarthy

Campaigners against the proposed plastic factory in Skibbereen, Co Cork have welcomed the High Court ruling to quash planning permission.

They expressed hope those behind the project could abandon it given it may take years to address the issues raised by the court.

Save Our Skibbereen (SOS) chairman Brendan McCarthy said the plan by US company RTP and its Irish subsidiary, Daly Products Ltd, to build the factory at Poundlick on the Baltimore Road in Skibbereen had met with considerable opposition locally.

“At our last public meeting in December we had over 400 people in attendance, so people were very concerned about the project getting the go-ahead from An Bord Pleanála last November,” said Mr McCarthy.

“So we warmly welcome the ruling by the High Court today quashing that decision and sending it back to An Bord Pleanála for further consideration. In this day and age, with all the concerns about plastics, this ruling is a positive development.”

Mr McCarthy explained that SOS, with himself as the named appellant, had challenged the planning board on a number of grounds, and the planning authority had conceded on one ground relating to the plant’s impact on Natura sites.

He said Natura sites are Special Areas of Conservation and Special Protection Areas, and SOS had successfully argued that An Bord Pleanála should have sought greater screening of water discharges from the plant.

We would have a very strong case regarding the Natura sites, so that could prove a significant stumbling block

He said there were three Natura sites within 15km of the proposed plant: at Lough Hyne, the Ilen River and Roaring Water Bay and the coastline between Sheep’s Head and Toe Head, which could all be impacted by discharges.

“We would have a very strong case regarding the Natura sites, so that could prove a significant stumbling block,” he said.

Mr McCarthy said it could take take a year and a half before submissions are made on the Natura sites and possibly another couple of years in the courts. Among those who have previously expressed support for the campaign are film producer Lord David Puttnam and actor Jeremy Irons, both of whom are local residents .

Among those to welcome the factory’s announcement back in April 2017 was Cllr Joe Carroll of Fianna Fáil. Contacted by The Irish Times on Tuesday, Mr Carroll said he had wanted to see more jobs created for Skibbereen, but he fully accepted the High Court ruling and would let things take their course.