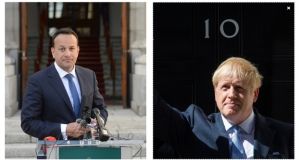 Taoiseach Leo Varadkar and Boris Johnson have spoken for the first time since the latter became UK prime minister almost a week ago. Photographs: The Irish Times and PA.

British sources described the call, which Irish Government sources said was initiated by Mr Johnson, as warm. Sources in Dublin also described the 15 minute conversation as “warm” and “friendly”.

Mr Varadkar told Mr Johnson that the backstop in the Brexit withdrawal agreement is needed because of decisions taken by the UK as it leaves the European Union. Mr Johnson has insisted that the backstop, the insurance policy to avoid a hard border, must be abolished if there is to be smooth exit from the EU.

A Downing Street spokesman said Mr Varadkar congratulated Mr Johnson on his appointment and that the two had “underscored their commitment to working closely together in the spirit of the warm and deep relationship between the UK and Ireland”.

An Irish Government statement said Mr Varadkar told the prime minister he “looked forward to having a long and close working relationship”.

There had been surprise that Mr Johnson and Mr Varadkar had not spoken nearly a week into his tenure but a Government source on Monday said it was “no big deal” that a conversation had not yet happened.

In recent times incoming UK prime ministers have placed a call with their Irish counterpart on the first day of assuming office. There have been heightened tensions between the UK and Irish governments over Brexit since Mr Johnson’s appointment five days ago.

The statement from the Government said: “On Brexit, the Taoiseach emphasised to the prime minister that the backstop was necessary as a consequence of decisions taken in the UK and by the UK Government.

“Noting that the Brexit negotiations take place between the UK and the EU, the Taoiseach explained that the EU was united in its view that the withdrawal agreement could not be reopened.

“Alternative arrangements could replace the backstop in the future, as envisaged in the withdrawal agreement and the political declaration on the future relationship, but thus far satisfactory options have yet to be identified and demonstrated.”

Downing Street emphasised that the leaders were determined to see the Northern Irish Assembly and Executive restored as quickly as possible.

“The prime minister said the ongoing talks have his unequivocal support and that he wanted to continue to work closely with the Irish government to help drive the process towards a successful conclusion,” Downing Street said. “He said he looked forward to visiting Northern Ireland shortly and talking to the leaders of the five main parties about this.”

The statement from Dublin said: “The Taoiseach restated the need for both Governments to be fully committed to the Good Friday Agreement, the protection of the peace process and the restoration of the Northern Ireland institutions.

“He recalled that the agreement requires the sovereign government to exercise power with rigorous impartiality on behalf of all the people in full respect for their rights, equality, parity of esteem and just and equal treatment for the identity, ethos and aspirations of both communities.”

Mr Johnson is reliant on the support of the Democratic Unionist Party for the survival of his government in Westminster.

A source said Mr Varadkar’s specific references to the Belfast Agreement were made to point towards the need for an open Irish Border as well as the ongoing talks on restoring powersharing at Stormont.

“The Taoiseach invited the prime minister to Dublin to share further their respective analyses on Brexit and to continue discussion of bilateral matters including Northern Ireland, the Good Friday Agreement and the Common Travel Area,” the Irish Government statement said.

Mr Johnson did not immediately take up the offer to visit Dublin but only said he looked forward to engaging further in future.

Regarding Brexit, Mr Johnson told Mr Varadkar that the “UK will be leaving the EU on October 31st, no matter what”, Downing Street said.

“He said that in all scenarios, the Government will be steadfast in its commitment to the Belfast Agreement and will never put physical checks or physical infrastructure on the border.

“The prime minister made clear that the government will approach any negotiations which take place with determination and energy and in a spirit of friendship, and that his clear preference is to leave the EU with a deal, but it must be one that abolishes the backstop.”

A Dublin source also said the pair spoke about the challenges of being a new prime minister, such as appointing a cabinet and that Mr Varadkar also noted specific aspects of the Belfast Agreement to Mr Johnson.

The source also said the pair recalled attending and addressing St Patrick’s Day events in Trafalgar Square, London, together in 2012 when Mr Johnson was mayor of the city and Mr Varadkar was minister for transport.