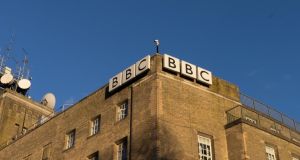 Members of the staff group BBC Pride – wearing BBC branded T-shirts – are to join the procession on Saturday. It is the first time the BBC has taken part in the annual event. Photograph: iStock

A former BBC boss has criticised the corporation for taking part in this weekend’s Pride parade in Belfast.

Writing in the letters page of the Belfast Telegraph, Ian Kennedy said he believed the BBC had “made a mistake in allowing its staff to participate in the Pride Festival as BBC representatives”.

Members of the staff group BBC Pride – wearing BBC branded T-shirts – are to join the procession on Saturday. It is the first time the BBC has taken part in the annual event.

The BBC said that participation in the parade did not affect its decision-making about BBC output.

Mr Kennedy, who is now retired, is a former head of BBC Radio Ulster and head of BBC NI television, as well as head of broadcasting for the south and east of England.

He said that while he “wholeheartedly” supported “equality for the LGBT+ community, including equal marriage rights”, participation in the parade as BBC representatives called into question the broadcaster’s impartiality.

“Whilst of course there should be no restrictions on any of them attending in a private capacity, I have problems on two specific counts,” Mr Kennedy wrote.

“First of all, the question of equal marriage is unfortunately unresolved in Northern Ireland. Whilst this remains the case, the BBC must be seen to be impartial on this subject and indeed on any contentious political issue, especially because it is in receipt of licence fee income from all sections of the community.

“Secondly, I find it very disappointing that the senior management of BBC NI has failed to face up to journalists’ questions on its stance – again because it should be seen to be responsive to all sections of the community that it seeks to serve.”

Mr Kennedy said that the income from the licence fee was a “tremendous privilege”, but that this brought with it “immense responsibility” and the “absolute requirement to be, and to be seen to be, accountable”.

“I firmly believe that the BBC is the best broadcasting organisation in the world and it should be particularly proud of its work over many decades in the challenging circumstances of Northern Ireland,” he wrote.

“Whilst the gay marriage issue remains a point of contention, the BBC lays itself open to accusations of trying to influence the outcome of the legislative process, whilst failing to defend its thinking properly to the licence-paying public.”

In a statement, the BBC said “BBC Pride is a staff-led initiative that seeks to reflect and support different aspects of workforce diversity.

“None of this affects our decision-making about BBC output. We are committed to serving all audiences and do this within the context of our editorial guidelines.”

Among the organisations which took part were the Police Service of Northern Ireland, the Northern Ireland Fire and Rescue Service, trade unions, universities, companies, charities and civil servants and politicians from Sinn Féin, Alliance, the SDLP, the Green Party and People Before Profit.