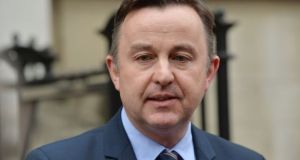 Brian Hayes said the Oireachtas golf dinner “caused a huge amount of angst in the country and I fully recognise that”. File photograph: Alan Betson

Mr Hayes attended the gathering in August of this year, which led to the resignation of then Minister for Agriculture Dara Calleary and European Commissioner Phil Hogan. Attended by more than 80 people, it went ahead despite Covid-19 public health guidelines placing limits on indoor gatherings.

However, Mr Hayes, who was formerly minister of state for financial services, said on Tuesday that he discussed the matter with the board of his current employer, the BPFI.

Asked if he had considered resigning, he said: “I did but I felt having spoken with our board that it wasn’t the appropriate thing to do. I took on an important responsibility for an important sector. A sector that I believe in, that has made a huge number of mistakes in the past, but a sector that’s important to the future of this country,” he told RTÉ Radio’s Drivetime programme.

“And I thought the right thing to do was to stick with it, to apologise, which I did, and I’ve no difficulty in making that apology again to you now,” he told presenter Sarah McInerney.

Asked if he was sanctioned by his employer, he said he had a “very long conversation” with the BPFI. He said the BPFI “took the matter very seriously and they’ve accepted my apology and I appreciate and recognise that”.

Several times, Mr Hayes returned to the point that he was on his holidays when the event occurred, and that he would usually attend the golfing dinner as part of his holiday routine.

He said that he was aware during the event that there was a second room behind a partition that had been set up.

Supreme Court Justice Séamus Woulfe, who has also come under severe pressure and faced widespread criticism for his attendance at the dinner, has said he was not aware there was a second room with attendees in it behind the partition. Mr Hayes made no reference to this in the interview.

Mr Hayes said: “I knew there was a second function room yes, and there was a clear partition between them yes.” Asked if he knew he was breaking the rules, he said: “Well I didn’t but I was hugely embarrassed when I went to the dinner and I apologise unreservedly now as I did at the time.”

He said that he recognises “he hurt that the dinner caused. Whatever the best motivations of people and the best intentions of people at the time it was wrong to have that dinner. I apologised at the time and I do so again. It shouldn’t have happened and I think it caused a huge amount of angst in the country and I fully recognise that”.

Asked again if he knew he was breaking the rules, he said: “I didn’t really and when I went into the situation I wished I hadn’t. I know at the time there are two very large rooms, an attempt was made by all of the organisers in the hotel concerned…but irrespective of the rules I shouldn’t have gone, there shouldn’t have been a celebratory dinner. That’s the point I’m making.

Mr Hayes, when asked if he could understand the perception that there was a golden circle of politicians socialising with representatives of the banking sector he said that was not what happened. “Anyone who knows me knows I play golf. They know I’m a former member of the Oireachtas. It was a social setting for people.”

He said he did not speak to Mr Calleary at the dinner. “I was on my holiday the idea that I was going to be lobbying for the banks or saying anything about banking policy to anyone, for anyone who knows me that was not going to happen on my holiday.

“I attended that same event for probably each year in the last 15 years. It’s normally the start of my holiday.

“All I can tell you is the truth and I know others want to depict it in another way but that’s a matter for other people.”