Why did the DUP Minister go off-script and raise old trope of irresponsible nationalists? 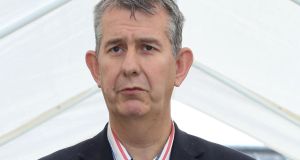 Perhaps it is only in Northern Ireland that tribalism could be injected into the Covid-19 crisis.

Insinuating that nationalists are some sort of Covid super-spreaders, as DUP Minister for Agriculture Edwin Poots did, hardly assists community or political relations.

It is playing to a very old unionist trope of irresponsible nationalism, and maybe worse. Some on the green side of the fence will give DUP politicians who hold such views a bit of a fool’s pardon: that’s just what they do, they can’t help themselves, let them at it.

Others, though, smarting at the provocation of the remarks, take offence and the old sectarianism merry-go-round starts rolling again.

Sinn Féin is playing it carefully, not getting too angry, but making its point, with former minister John O’Dowd demanding an apology from Poots.

SDLP, Alliance and Ulster Unionist politicians also rounded on Poots, with UUP leader Steve Aiken coming up with the good line that Covid was an “equal opportunities killer”.

But no apology is forthcoming from Poots or the DUP, nor is there any insistence from his leader, Arlene Foster, that he offer such contrition.

A side factor here is that the Lagan Valley MLA is viewed as a rival to Foster, prompting some speculation that this was a little shot across the bows of the DUP leader, in preparation for a more lethal strike some time in the future. There is no such threat, Gregory Campbell insisted on BBC on Tuesday.

And Poots wasn’t engaging in a “solo run” when he went on BBC and then UTV on Friday to have his say, DUP sources acknowledge. They say, however, that he went beyond his brief by bringing sectarianism into the mix.

Certainly the incidence of the virus is higher in the mainly nationalist Derry and Strabane council area. But elsewhere in Northern Ireland it is questionable whether such deductions can be made, particularly with other factors such as social deprivation coming into play.

Regardless, the central point Poots was deployed to make was that, while the other parties were prepared to impose stronger restrictions, the DUP had agreed to these new rules only very reluctantly. Its basic concern, as Foster indicated on Monday evening, was that there must be a balance between addressing the virus and saving jobs and the economy.

Poots was to breach Executive collective responsibility by setting down a marker that the DUP would resist stricter regulations, such as those introduced in the South.

But why did he make the remarks in the first place? The short answer is because that is what quite a number of DUP politicians are hearing from their supporters.

“Our people are getting on the ground that Sinn Féin can do what they like,” says one DUP source. “People saw what happened at the Bobby Storey funeral, and they are also complaining about crowds gathering at GAA games and totally ignoring the rules.”

The source adds that DUP politicians are taking considerable flak from people running small and medium-sized enterprises who said they were being driven out of business by unnecessarily stringent rules.

Poots certainly created a distraction from all that grief, but it is an unwanted distraction. It is souring political relationships when the Executive needs to pull together. It also has the potential to curdle community relations.

In the grip of the virus, when Northern Ireland has the highest incidence of coronavirus on these islands, and in the face of a possible no-deal Brexit it is a row Northern Ireland could do without.