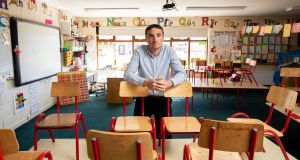 Tiernan O’Neill, principal of Corpus Christi primary school in Moyross: ‘We are still talking about schools still being provided with appropriate measures that enable us to remain open.’ Photograph: Alan Place

Looking around the yard in Moyross National School, which has 350 children on its roll in one of the State’s poorest districts, principal Tiernan O’Neill is certain of one thing. The school must not close.

It is “absolutely imperative” that the Deis (disadvantaged) school remain open despite the Covid-19 pandemic, he argues, not only to avoid “huge impacts” on his students’ ability to study and learn, but also on their “mental and social progression”.

“Unemployment, addiction, and homelessness are already huge issues here,” O’Neill tells The Irish Times, and the Covid-19 restrictions that affected the State for months have “exacerbated” Moyross’s already existing problems.

Acknowledging the fears held by some teachers about the schools staying open, Mr O’Neill said he saw the effects the first closure had on his students: “The level of anxiety of children returning to school was huge.”

The school raised funds in the early months of the pandemic to buy tablets and laptops for children so that they could learn online at home: “We purchased 60 digital devices, and it nowhere near met the demand. We would need a further 60 to 80 at a minimum.”

Even with the equipment, digital learning creates its own problems, says O’Neill: “Nothing beats the physical connection with the teacher, the warmth, the empathy, the care, the love that emanates from teachers in the classroom to coax, to guide, to cajole children along.

During the first lockdown, some of O’Neill’s pupils had to access online platforms on their mobile phones: “It’s too small a screen, it’s just not conducive to positive interaction, it’s another massive issue.”

“Online learning has further widened the gap between the haves and the have nots. More importantly, the gap that we as a Deis school had started to narrow are starting to widen again,” he went on.

The existing testing and tracing system is shambolic, he agrees: “It’s not good enough that, at a weekend or late at night that I am ringing parents about making public health decisions about whether children should come to school the following day.

“The current situation in schools is completely untenable. The biggest issue we would have, and which the Government has completely failed to deliver on, is a fit for purpose, fast-tracked, school-specific testing and tracing system.

“This pandemic didn’t just arrive yesterday; schools went into lockdown last March – yet here we are still talking about schools still being provided with appropriate measures that enable us to remain open.

“What has gone on in the Department of Education for the last seven or eight months?” he queries. “The silence from [it] is deafening, and no matter what kind of fancy terminology you use, such as ‘bubbles and pods’ – our schools are overcrowded and under-funded.”

Clearly angry, the Moyross school principal went on: I’ll be very honest with you, we don’t need any more patronising soundbites from the Department about the wonderful work we are doing.”

The coming winter months poses fresh challenges, he says: “The window for getting children out into the yard and open air is narrowing with every day that passes. These kids are going to in confined spaces for longer periods of time.”