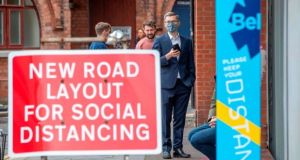 Northern Ireland, which has the highest rate of Covid-19 infection on these islands, is beginning to see a slowing down in the rate of increase of the virus, it was reported tonight.

Extra restrictions imposed in and around Derry and Strabane, Co Tyrone, which have experienced the highest numbers across Northern Ireland, are also beginning to work.

Northern Ireland will not have to match the Republic’s latest restrictions as in the Republic if current trends continue, the North’s chief medical officer, Dr Michael McBride, and chief scientific adviser, Prof Ian Young, indicated.

Dr McBride said there is no evidence to back up Democratic Unionist Party (DUP) agriculture minister Edwin Poots’s claim that the virus has spread faster in nationalist, than unionist, areas.

“At no stage would we have either publicly or privately suggested that there is a link between the transmission rates of Covid-19 and people’s political affiliation or religion. There is no such evidence,” he said.

There were three more deaths, bringing the total to 624. There are 286 Covid patients in Northern Ireland hospitals, 29 in intensive care units and 25 on ventilators.

Most of Northern Ireland’s hospitality trade closed for four weeks last week, while schools shut for two. Derry and Strabane have faced a stricter lockdown since the start of October.

Not only has there been a sign of a general slowing of the rate of increase of the virus, the numbers in Derry and Strabane are showing a steady “decline”, said Prof Young.

Derry and Strabane have seen 718 cases over the last seven days per 100,000 people. A week ago the figure stood at 970. Dr McBride said the measures have had a significant impact.

The second Covid-19 wave will cause fewer deaths than the first outbreak, he added: “That’s because generally our experience of treating Covid is much improved.”

Dr McBride and Prof Young said they were confident that the restrictions imposed by the NI Executive “are hard enough and [for] long enough to suppress” the virus, but the public must heed the rules.