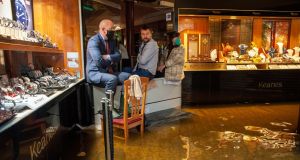 Taoiseach Micheál Martin has said “humanitarian” supports will be provided to businesses and residents dealing with flooding in Co Cork.

Mr Martin told the Dáil on Tuesday an incorporeal meeting of the Cabinet would take place to deal with aid for flooded businesses and residents in Cork city and Bantry.

He said “humanitarian and business schemes are going to be given to all the businesses and residents living there”.

Mr Martin said that “certainly there are a number of schemes that we will activate to assist and help those traders and those in difficulty.

“Obviously there will have to be applications. I can’t determine the precise amount here.

“Whatever the demand is in terms of what qualifies, will be made available.”

He also said that the flood relief scheme planned by the Office of Public Works, which was the subject of judicial review, should go ahead.

He told the House that Fianna Fáil colleague Cork South-West TD Christopher O’Sullivan had told him of flooding in Bantry as well.

The Cabinet considered the issue of flooding on Tuesday, Mr Martin said during the Order of Business.

“There will be a further incorporeal in terms of making sure that measures for Cork will include Bantry in that.”

Mr Martin was responding to Labour Party leader Alan Kelly asked how much would be available to the businesses based in the Lower Mall and the Oliver Plunkett Street area which “faced into devastating flooding”.

And he asked “what is the long-term plan as regards that part of Cork city which we know will flood again and again?”. The city has been flooded a number of times in recent years.

The Taoiseach said he was “desperately disappointed and sorry” for all the traders involved. He said that at this particular time as they face into a lockdown “this is the last thing they need”.

Mr Martin told the Labour leader that “the long-term plan is the OPW plan”. He said it was the subject of a judicial review.

It had had planning permission and “a lot of modification happened”, he said.

“There was a lot of engagement. In my view there were a lot of changes made. I think it is a good plan and I think it should be allowed proceed.”

Campaign group Save Cork City took legal action against the plan in 2019 which it says it too dependent on walls. Cork City Council submitted a new plan to An Bord Pleanála which granted planning permission in June.

Save Cork City has sought a judicial review and the High Court is to rule on November 3rd on whether the group can proceed with the challenge.

The €150 million plan, proposed after bad floods in 2009, involves the introduction of demountable barriers along the North Mall and a variety of other flood defences along 15km of the river Lee.