School ordered to reopen after closing due to Covid-19 fears 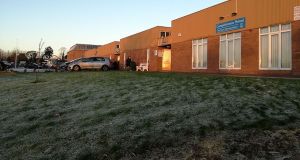 Tarbert Comprehensive School in Co Kerry has been ordered to reopen by the Department of Education after deciding to close due to an ‘alarming increase’ in Covid-19 cases. Photograph: Giacomo Antonio Lombardi

A secondary school in Co Kerry which decided to close due to an “alarming increase” in Covid-19 cases has been ordered to reopen by the Department of Education.

Tarbert Comprehensive School, a 520-pupil school in north Kerry, told pupils and parents on Monday evening that the school was closing immediately due to the need to protect the health of the school community.

School principal Richard Prendiville said he took the decision in conjunction with the chair of school’s board of management.

However, Mr Prendiville wrote to parents on Tuesday evening to say the department has since “expressed a difference of opinion” regarding the closure.

“The department believe, in keeping with national policy, that individually affected students should remain off school as opposed to a decision to close the school entirely,” the principal wrote.

“Therefore, the department have over-ruled the decision to close Tarbert Comprehensive School and instructed me to reopen from tomorrow morning. Naturally, I have no choice but to comply with their instruction.”

He said the school was aware of seven confirmed cases of Covid-19 among the student population since October 14th, along with 45 close contacts.

Under protocols published at the start of the school year, principals were advised that classes or schools should only remain at home following advice from public health authorities following a risk assessment.

Mr Prendiville said the department had also instructed the school not to provide work at home to students who opted to remain at home due to fear of infection.

However, if a student is required by the HSE to self-isolate or restrict their movements, they can be supported in continuing their learning remotely.

“My over-riding rule of thumb throughout my career has been ‘what is the right thing to do’ in every circumstance I deal with,” he added.

“This situation was no different. I will continue, to the best of my ability, in consultation with all the stakeholders of the school, to manage the health, safety and welfare of individuals to the very best of my ability.”

Mr Prendiville said his original decision to close to the school followed an “alarming increase” in positive cases in the west Limerick and north Kerry areas.

There had also been a “failure by some to inform the school authorities members of their families had tested positive for Covid-19, while at the same time informing others” he wrote.

In an earlier message posted on Monday, he said negative commentary and offensive messaging directed at some students who had the virus has been brought to his attention.

Mr Prendiville said no one was at fault for being diagnosed with Covid-19 and no one could be blamed for being a close contact.

“A blaming approach could potentially lead to a scenario where people do not come forward if tested positive and then later lead to difficulties in contact tracing,” he wrote.

“It is therefore vital that support, empathy and compassion are afforded to students and their families affected at this time.”

A department spokesman said it did not comment on individual cases, however he said current guidelines ensure no school principals are “burdened with the responsibility of making a public health decision”.